Can you explain the reasoning behind the regional slot distribution for Masters: Reykjavik?

One of our biggest goals for 2020 was to launch international events as quickly as possible. As planning was going on for the League of Legends Mid-Season Invitational, we were presented with an opportunity to utilize that event’s infrastructure to execute an international 10-team VALORANT LAN earlier than anticipated. With this team limit, our first priority was to make sure each of our seven VALORANT regions was represented at our first global event.

Subsequently, we had to make some tough decisions with the remaining three slots. As we were trying to make these decisions, we looked at each region’s playerbase, viewership, esports infrastructure, and team participation within regional VCT tournaments; criteria that EMEA, North America, and Brazil all scored especially high on. Ultimately, we chose to grant an additional slot to each of those regions to optimize for regional diversity at the first international event. We think this will lead to a more exciting tournament, but we may make changes to future slot allocations based on learnings from Reykjavik.

How are casters for regional broadcasts selected? Who can cast in which region?

This year there has been a lot of discussion on how regional broadcasts select their casters, and whether casters from one region could cast VCT matches of another region.

Early on in VALORANT Esports, some broadcast teams experimented with utilizing casters from regions that were geographically distant from the participating players and production hubs. This led to a large variance of audio delays, as signals travelled back and forth across the Atlantic Ocean, and then to distributed broadcast teams.

These delays were especially pronounced during live matches which involved casters hailing from different continents. For regional broadcasts, there are technical limitations that impact broadcast quality when using casters who are very geographically distant from each other and Riot’s broadcast teams.

After First Strike, to optimize for the best available broadcast quality, we opted to build VCT shows around casters that were geographically close to the competition and broadcast team. For Masters: Reykjavik, we are planning on producing a unified English broadcast that will feature representation from multiple regions. This is a similar approach to League of Legends, where we utilize casters that are near to each other.

What is the philosophy behind the Masters points structure for this year?

When determining how teams would qualify into Champions this year, we had one main goal - make it the most competitive tournament possible. To do that, we needed to weigh a variety of factors. First, we wanted to ensure that we were rewarding teams who have shown consistent results throughout the year. However, we also wanted to ensure that we were valuing the recency of results - finishes closer in time to Champions are likely a better indicator of success than finishes months earlier. Finally, we considered the fact that as we move to international competition, the difficulty of winning Masters grows.

This all resulted in our existing Masters points structure. We believe that the balance of lower points at the Regional Masters events, followed by an increase in available points heading into Masters: Reykjavík, and an additional increase in points heading into Stage 3 Challengers (along with the automatic qualification into Champions for the winning team) will help us meet our goals.

It's important to remember that Championship Points will also count towards seeding at the Last Chance Qualifiers, pan-regional tournaments that will select the final teams for Champions, not just for qualification into Champions itself.

For those of you who want to read more, we recently published a detailed breakdown on the 2021 VCT that offers more specific details. 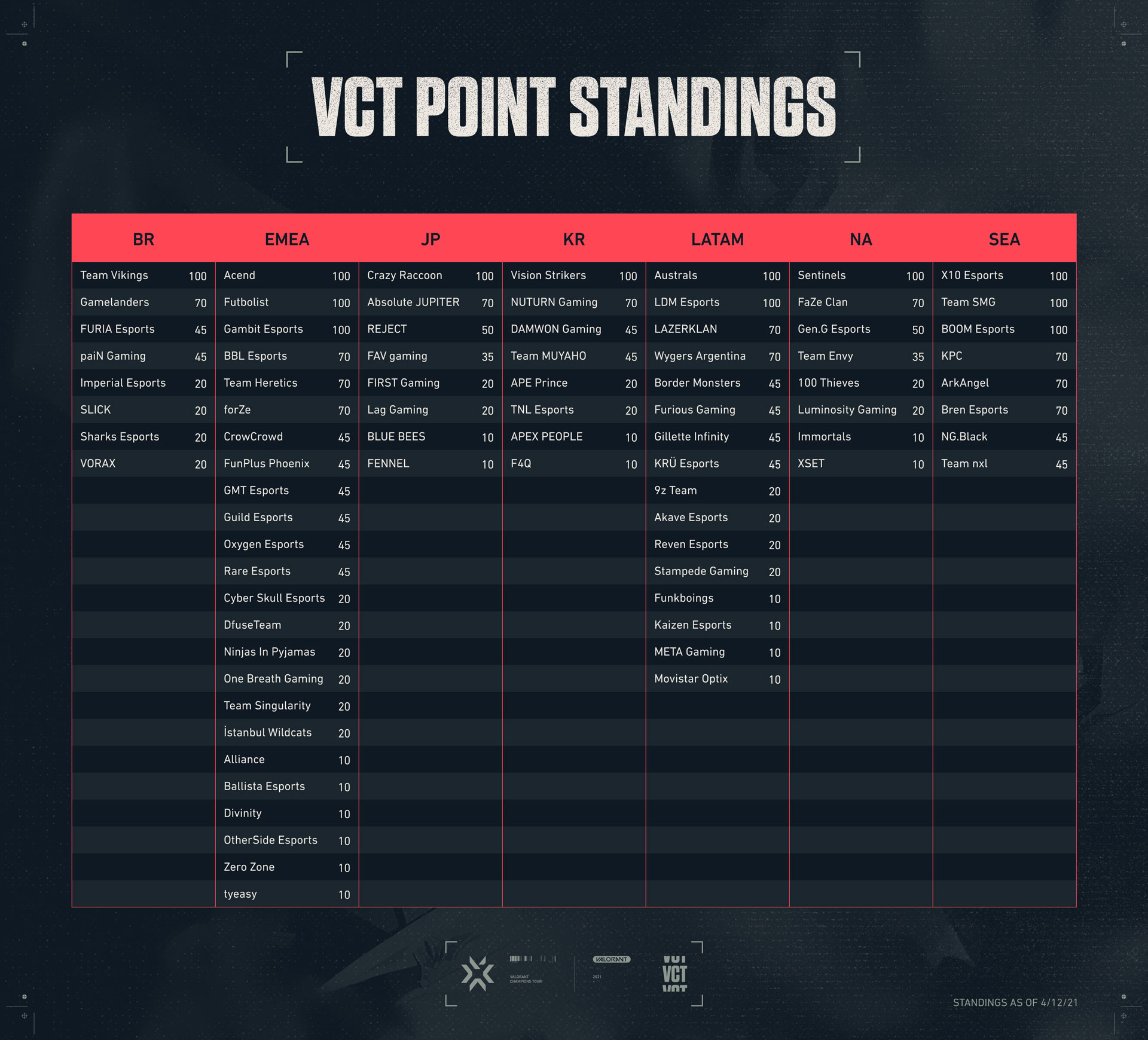 Will regions who are currently not participating in official VALORANT Champions Tour events be able to qualify for Champions?

As we welcome new players into VALORANT, we want to expand competitive opportunities in their regions. Tournament circuits like Strike Arabia, that while not part of the VCT, will allow for players in the Middle East and North Africa to participate in the EMEA Last Chance Qualifier (and have a path towards Champions). We want to take a similar approach with other new regions, leading to larger, more competitive, and more inclusive LCQs later this year.

When are coaching slots coming to VAL?

It’s official, coaching slots are coming in patch 2.08! As an esport, we continue to be excited at the prospect of coaches playing a larger role in matches and plan to provide more analytical tools in the future.

Overall, we see the coach and player relationship as an important dynamic in our esport. We have some ideas on where we want to take this and will be talking with players (specifically In-Game Leaders) and Coaches in the near future to solidify our plans.

What you’ll see in 2.08 is the basic foundation of this feature and something we plan to continuously innovate on. We look forward to evolving coaching and its supporting features with help from VCT participants.