I get less Ranked Rating per win and more per loss, and it feels like the system is holding me down. Why is that?

Buckle up, this answer will take you on the wrinkle brain highway. We are going to get a little in the weeds, and have to explain how our ranked system functions in order to answer this!

VALORANT uses a Match Making Rating (MMR) system to target your performance skill level. MMR is a giant ladder, consisting of all players. If you win, you climb up and push others down. Alternatively if you lose, you get pushed down by others. No two players can tie, or take up the same spot on the ladder. This is the core concept for most matchmaking systems, and the math that determines how fast you climb up (or push others down) is the hard part.

MMR is a fairly fluid system that can potentially change substantially game to game. We’ve kept this slightly decoupled from your visible rank and RR so we can make sure that you don’t experience wild swings in your rank or instantly demote after a promotion.

That’s your base understanding of MMR, so now let’s explain how that relates to your Ranked Rating gains and losses.

To start, we need to reiterate that your Rank is separate from your MMR. You will never see your MMR—it’s what we use to create fair matches. When you queue into ranked for the first time, or after an Episode reset, we have an idea of where your “Rank” belongs because we rely on your MMR as a guideline. Unfortunately we only have an “idea,” so we place you on the low end of where we think you belong.

We place you on the low end mainly to reach what’s known as “convergence.” We believe it’s better to place you on the lower end of our rank estimate, and then test whether that is actually low by asking you to prove you belong at the higher rank. You pass, and your Rank Rating (RR) will reflect this. You’ll see more RR per win, and less per loss—all on the way toward the high end of the Rank you are being “tested” for. Voilà! You are now “converging” to your MMR.

Eventually your Rank will converge very close to your MMR (unless of course, you begin to lose, then your MMR will begin to drop). When this happens you will get a relatively even amount of RR per win/loss. Now that you’ve reached your MMR, you’ll need to improve in skill and win against your opponents more than you lose in order to climb above our original estimates. When you are at your MMR, we’ve most often seen you with a 50% win rate. Even with a 50% win rate, you could go on a long winstreak and promote to a rank above your MMR.

Just because a player has a good winstreak, or a few good games, does not change the fact they are still only maintaining a 50% win rate and now have promoted above their MMR. This, along with demotion protection, will sometimes lead to players sitting one rank above their MMR.

If you do end up with a rank above your MMR, the system will try to push you back to your intended rank—this is what losing more RR on a loss, than gaining on a win, looks like. This is something you can fix by winning more matches than the players above you who are around your current MMR. This was an issue seen even by top players on the leaderboard. When there are very few players ahead of you it can become very difficult to climb. If your MMR isn’t truly above a player ahead of you, the system does not want you to take their leaderboard spot.

We believe the integrity of Competitive play would be compromised if we let those on the leaderboard “out grind” their MMR and pass someone they don’t truly belong in front of. So all players are held to the same standards: In order to climb you must prove you are better than those above you. So, if you are winning slightly over half your games and have 200 wins, but another player is winning the vast majority of their games but only has 100 wins, that player with 100 wins will likely sit higher on the leaderboard because of their MMR.

Ranked is about finding your true skill and we will hold you accountable to the skill level you are playing. If you truly outperform your opponents and win more than you lose, you will climb that ladder and increase your MMR. Again, when you raise your MMR, you’ll then increase your RR gains and open the door for an easier climb! 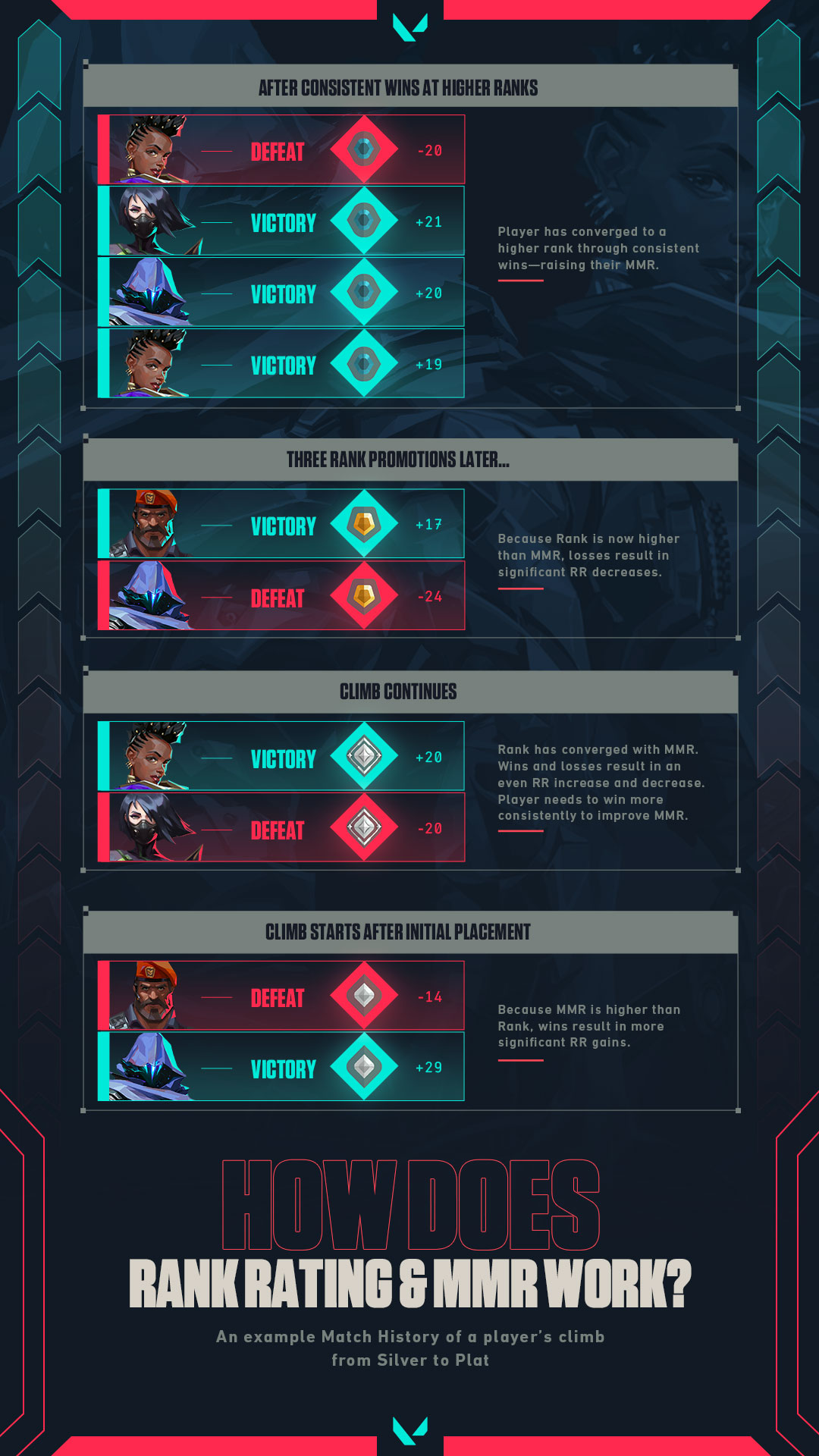 Increase your MMR by outperforming your opponents and winning more consistently!

THE END, WE SWEAR

Whew, that was long. MMR and Ranked systems are necessarily complex given the sheer amount of skill and performances it must handle. This is just a small example of the calculation, and there are lots of reasons why we chose to go this direction with ranked currently.

That being said, we know it can feel frustrating to lose more RR then you are gaining. We are investigating solutions to prevent your Rank from pulling well ahead of your MMR, as well as trying to figure out if we can make it feel better when it occurs. Due to issues like these, you may see minor math tweaks to RR gains in future Acts. We are also always listening and will continue to communicate our changes in patch notes and social, but hopefully not in another Ask VALORANT.