We’ve talked about how we design Agents in the past—and we talk about making League champions a lot. This time we want to share more about how we made Neon because it’s a bit different from how we usually do things. But first, a quick refresher.

We design Agents through a process called DNA. A game designer, narrative writer, and concept artist are assigned to an upcoming Agent, and in the beginning, there’s just a starting seed—like a design, narrative, or diversity goal. This could be making another Radiant, or adding another duelist to the roster, or exploring a different region of the world with a character who calls it home.

From there, the core team (because there are a lot more folks involved than just DNA) brainstorms... a lot. They toss around ideas, create paper prototypes, write flash bios, and draw spreads of concept art.

Slowly we have someone who feels unique, cohesive, and adds something exciting to the current roster. Then bam, you have 500 files named finalfinalFINALIPROMISE, hundreds of animations, meshes breaking in places no one knew possible, sound effects playing randomly, wait why is their face texture on their hands... Oh look, we have an Agent!

They release, armchair designers come out of the woodwork on Reddit, Twitter explodes with an overabundant amount of fan art, and everyone turns on all chat to flame Rioters in-game.

Except, that’s not Neon’s story.

Listen, we go on the internet. We’ve seen your fan theories and side-by-side comparisons of Neon and Zeri, League’s newest champ. And to officially set the record straight: No, they’re not the same characters, no they’re not related, but they were made in tandem by the League and VALORANT teams.

“How did it get started?” You ask. As many things do, the Agents Team Lead John “Riot MEMEMEMEME” Goscicki and League Champions Team Lead Ryan “Reav3” Mireles were scheming. 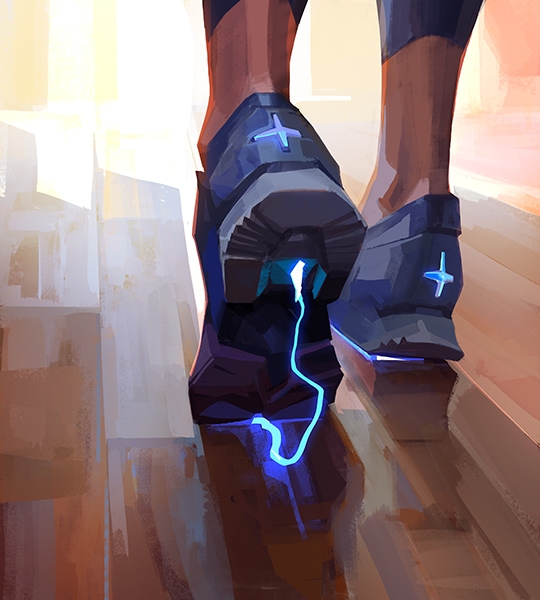 “A long time ago we were brainstorming what we could do for the launch of Arcane (League’s new animated show on Netflix—go watch it). It was a huge moment for all of us at Riot, so I messaged Goscicki to ask if he wanted to co-launch a champion and Agent together during the event,” recalls Mireles.

“It made a lot of sense, a lot of the VALORANT Agents team worked on the Champions team before—Goscicki included—and we share a lot of the same processes. And a lot of Riot players play both League and VALORANT. So we thought it’d be cool if they could play these two characters in both games,” Mireles shares.

“I actually remember that even before that conversation, you and I would message each other and say, ‘One day we’ll co-launch characters. One day we’ll collaborate and it’ll be cool,’” laughs Goscicki. “And then when this opportunity came up we were like, ‘IS TODAY THE DAY???’ And yes, it finally was the day.”

But before they got started, the team needed to figure out what they were actually making.

League and VALORANT are very different games in very different IPs. Sure, they’re both online competitive games developed by a small indie company with a penchant for nerfing your main. But League’s set in a fantasy world where champions actually use abilities to get kills, whereas in VALORANT, shooting matters and you don’t kill with abilities (allegedly). They just create tactical opportunities to take the right shot.

That meant Mireles and Goscicki needed to do a bit of groundwork before development really began.

“When either of our teams get started, we generally have a pretty good understanding of our goals. But when it came to Zeri and Neon we just... didn’t really know what that space looked like,” admits Mireles.

“In League we have diversity goals in terms of role, region, gender, and playstyle. VALORANT has most of these as well—but they’re very different from what we do in League. So we needed to make sure we found a space that was good for both of our games, and was exciting for players. Because if no one wanted to play these characters, what was the point?” Mireles asks.

That meant the characters needed to stand on their own. Sure, a bunch of us play both games, but the majority choose one and stick with it. And while adding a mute K-pop heartthrob who assassinates people with magical moon weapons gifted from his twin sister who lives in space to VALORANT just because Aphelios exists in League might be a fun idea, that doesn’t mean it works.

Old friends and good intentions aside... how the actual f*&^ do you design a champ and an Agent together? The answer is surprisingly simple: Combine teams.

“I’m a huge fan of VALORANT. When it first released, I talked to a few of the game designers on the team like, ‘You know, I’d love to make an Agent some time...’ And so when we were told about this opportunity I just jumped at it,” Game Designer August “August” Browning laughs. “Making two characters in tandem meant we faced a bunch of new constraints, which is fun and exciting as a designer. We needed to find a shared power source—but something that works in both League and VALORANT. We needed to figure out if their personalities were similar or opposite and complementary... There were so many questions that needed to be answered.”

Let’s start with the power source.

League’s a world of endless possibilities when it comes to sources of power for its champions. There’s a space dragon who created the cosmos, a doll with magic scissors, and a literal mountain (whose ultimate is to move really fast—don’t ask). VALORANT has two: Tech and Radiants.

Raze throws grenades, Killjoy uses bots, and Cypher is Great Value Inspector Gadget. Phoenix throws solar fire, Jett uses wind, and Sage resurrects her allies in front of a cracked enemy with an Op. So the team decided to brainstorm some ideas for a shared power source across both games.

VALORANT rewards you for good rotations, ego peeking, silent flanking, and flash banging your entire team as they push the point. Whereas League’s about setting up flank TPs to enable your fed top laner to push a side lane while you goon squad mid. And while there are plenty of Agents who are really mobile (nerf Jett), there’s no one who literally embodies speed.

“Neon’s constant access to speed means she’s the most mobile Agent in VALORANT,” Game Designer Ryan “rycou” Cousart explains. “She completely shatters what we know about speed and mobility in the game and will heavily test players’ moment-to-moment decision making as a duelist. With great risk comes electrifying rewards.” :) LOL (Addition insisted upon by Cousart.)

But “move fast” isn’t a power source. Sure, running laps on the enemy team is fun, but other than “run really fast” what can they do? So the team took a step back to find a source of power, something that explains why Neon and Zeri would go fast.

“We landed on the idea of electricity, which lent itself to the speed idea,” shares Lim. “But it also had this nice tie-in to where we wanted these characters to be from in the real-world: the Philippines. I grew up in Manila, and we were planning on making Filipina characters—something that means a lot to me, personally. And in Manila we have a lot of blackouts, and electricity problems in general. It just felt like a nice little nod to life there.”

“We latched onto this narrative concept of positive and negative when we saw the electricity concept art. Both Neon and Zeri have this feeling of fighting for their communities, but we still wanted them to be their own people,” explains Narrative Writer Michael “SkiptoMyLuo” Luo.

“Neon’s the negative charge and Zeri’s the positive. Neon’s prickly and a bit more guarded—blunt, sarcastic, slightly biting. It seems like she doesn’t care about you, but deep down she does care and wants to do the right thing. Compared to Zeri’s warm, bright—but still stubborn and impatient at times—personality, we just felt like it was a cool way to tie their electricity theme into who they are,” Luo adds. 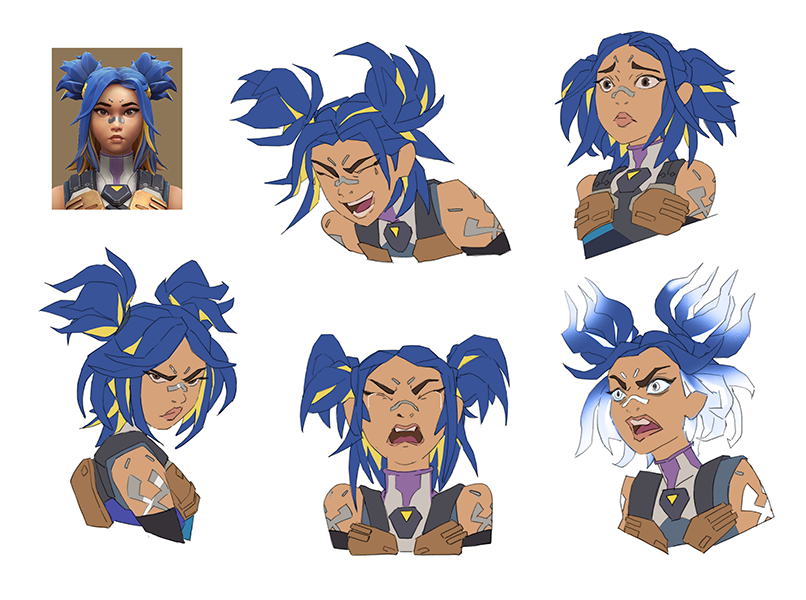 Both Neon and Zeri come from big, supportive families and communities—something inspired by the “Bayanihan Spirit” in Filipino culture—but what makes them different is their reaction to it.

“Neon comes from a big family in the heart of Manilla,” explains Narrative Writer Joe “Riot ParmCheesy” Killeen. “Unlike Zeri, who embraces the love and support from her family, Neon is overwhelmed by it. She still loves them, and has a strong sense of service and duty for her community, but she’s more withdrawn. It’s just a different reaction to a similar upbringing, which we thought was a cool opportunity to explore while making these characters.”

But combining forces to make characters together still had its challenges. And while we’re one company, we’re still talking about two wholly different games.

“August had some really... interesting ideas for gameplay early on in development,” laughs Cousart. “We knew we wanted to go with speed, and he pitched the idea that Neon had full access to a sprint at all times. With no cooldown.

Speed’s one of the ways we can create consistent learnability in VALORANT. Pros and high-level players can tell you the exact amount of time it takes to go from site-to-site, so the idea that we should just shatter that honestly gave us night terrors,” he continues. 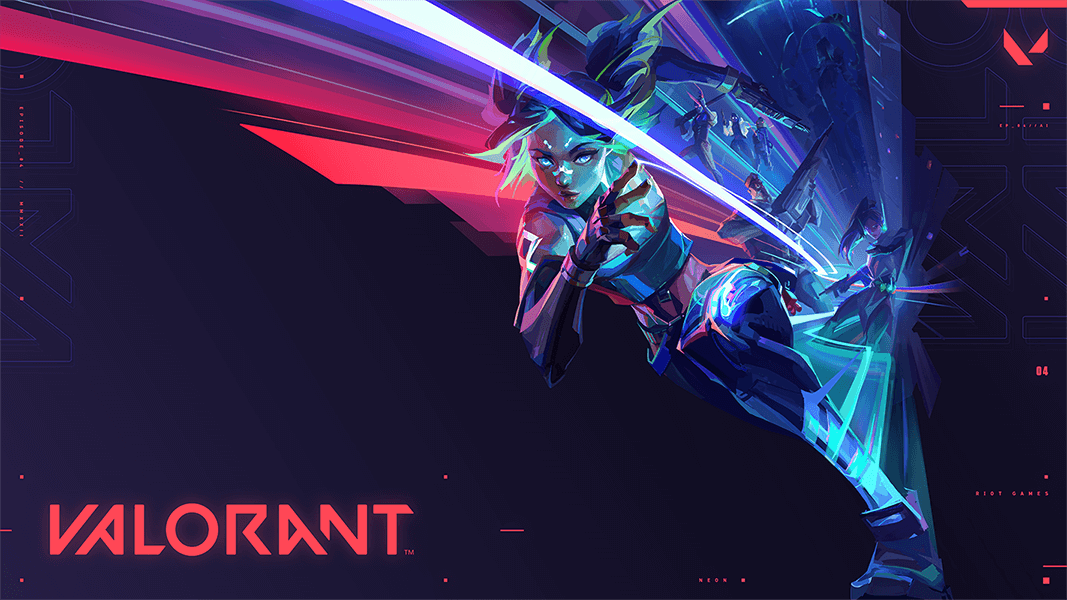 “The reason I gave Neon finger guns is because August wanted Zeri to be reliant on a VALORANT-style gun, so I wanted to try making Neon not have a gun,” says Cousart

Another early game design idea for Neon was a one-shot LIGHTNING HANDS mechanic that was completely accurate while running and reset (don’t ever complain about something being OP again, thanks). And while this was certainly a unique take on an Agent, it was too much. So the team pulled back and put some design constraints into place: No one-shots, sure. Cooldown on sprint? Ehhh... About that.

Neon’s fantasy is to run fast and zap people while doing it. And restricting her access to speed left her feeling pretty sluggish. That meant August and Cousart needed to ask themselves a hard question: Is it worth challenging what we know about movement in VALORANT?

“We decided to go with giving Neon constant access to speed, at all times, with no cooldowns,” August shares. “Instead of going with the cooldown we restricted the strength of it in other ways. Like making it so her guns are down and she can’t jiggle peek at high speeds. This means you’re at risk whenever you want to use her speed, a stronger knife run in many ways. We just felt like, overall, this made more sense for her power fantasy, which is to run fast for extended periods of time.”

“Something August really helped with was challenging the way we think about designing Agents overall, not just Neon,” Cousart shares. “Every time he encountered a guardrail we’d had in place for VALORANT design he just asked us ‘Why not? Why can’t we do this thing?’ It taught us a lot of things: Why VALORANT is different from League, sure. But it also helped us realize where the similarities are.

Cousart continues, “I’m not saying that every guardrail should be smashed, but it taught us to test what we thought was our limit previously, instead of pushing to try new things. It made us learn more about our own game, and changed the way we think about design on Agents in the future.”

But don’t worry. If you’re really concerned about what this means for our next Agents, rest assured that the next one’s definitely not a duelist.

Riot Cashmiir is a writer and Viper appreciator. She doesn’t understand what a bonus is and reloads at inopportune times because it looks and sounds cool.