True to Form: The story of Reaver

It’s been a while since we, Sean and Preeti from the Premium Content team, have written an article on our cosmetics (but have you read Sammi’s story on Nunca Olvidados?), so we’re thrilled to again deep dive into how we make weapon skins in VALORANT.

Today’s topic is not only a throwback to the past but also one of our personal favorites: Reaver! 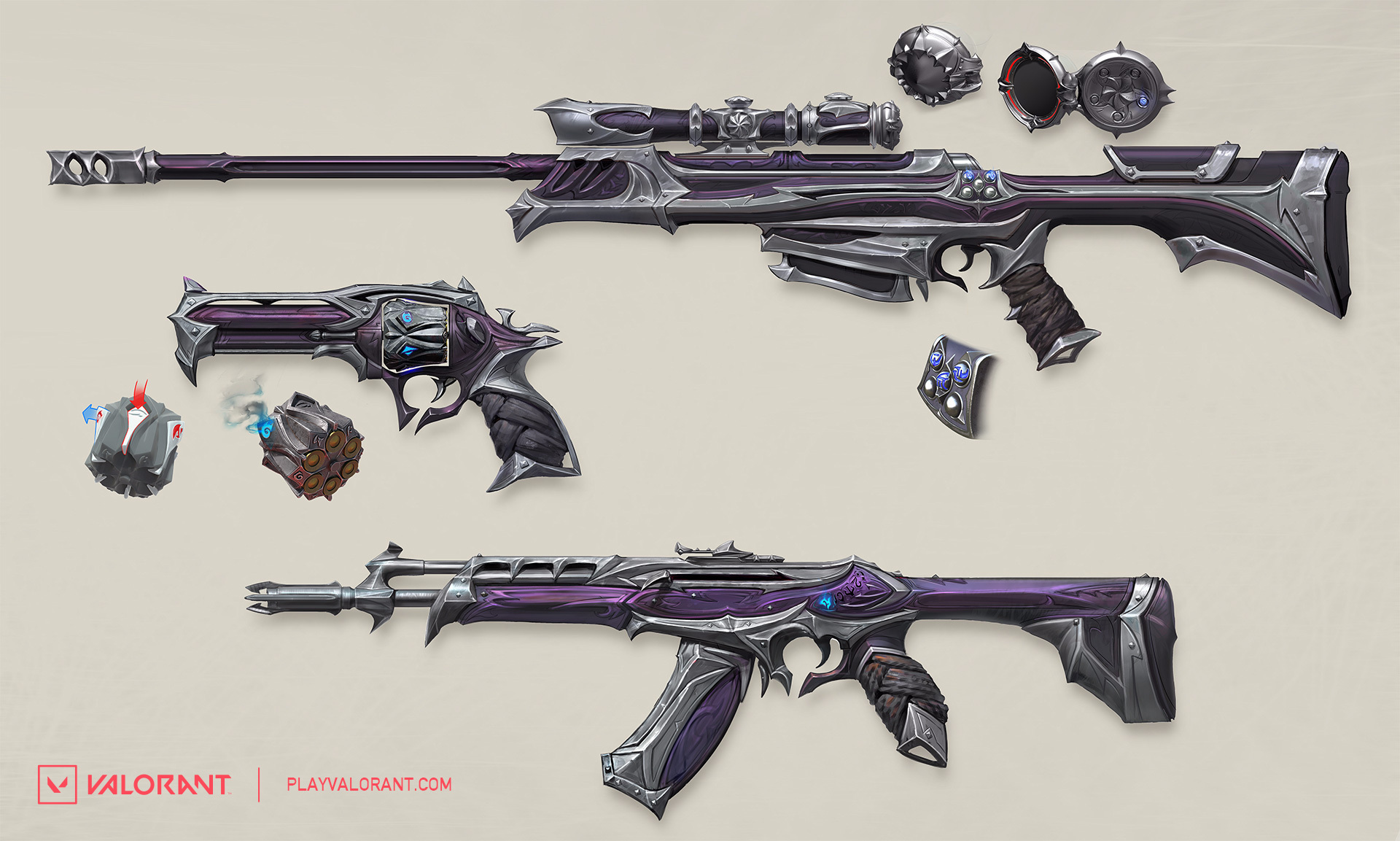 Reaver has a very long history with VALORANT, dating all the way back to 2018. Reaver was one of the first skins the team developed when we were still trying to figure out what skins in VALORANT should be. It may seem obvious now (cool FX, animations, audio, a Finisher, etc.), but at the time we had no idea what we were capable of, what we could do given our strict gameplay constraints, and what our prospective players would even want from skins.

Did you want deep, cohesive fantasies? When we say “dragon” would you want an image of a dragon painted on a gun, or would you actually want a gun that was a “living” dragon? Could we even customize audio or change the gun’s silhouette without causing confusion? What if we pushed a skin too far?

To answer all of these questions, we created our first prototype, Reaver.

This “skin experiment,” was our first attempt at making a skin with a custom model, animations, effects, audio, and a Finisher. We tested it over and over again with our design team and in super secret research labs around the world almost two years before VALORANT launched.

These tests helped us learn a lot about what worked and what didn’t, which helped us develop many other skins that you’ve since come to love—Prime, Oni, Elderflame, and others. We even put Reaver in our Closed Beta test to help get extra feedback on what worked (and what didn’t) with premium skins.

In that sense, Reaver was almost a ritual sacrifice for the greater good of VALORANT skins. It was never meant to come back “for real” once the game launched!

Fast forward to the worldwide launch of VALORANT in June 2020, when we launched Prime and Sovereign. We were really happy to see how much you loved our skins, so all the work we did testing Reaver felt like it was worth it. However, we also heard a lot of feedback we didn’t expect!

Back in 2020, the two of us didn’t spend a ton of time on social media, but whenever we did all we’d hear was players telling us to “bring back Reaver!”

DEVELOPING WITH AND FOR THE COMMUNITY

A huge part of being VALORANT devs is listening to the community and doing what is best for you, so of course we were going to bring back Reaver. As a team, it meant an exciting chance to rework an old friend and bring it to the quality level of our other skins (we even had a little fun with the first Player Card, which depicted a group of mages summoning a revival spell to conjure something from the dead—basically, that’s us bringing back the Reaver skins).

We knew we had a ton of other amazing skins coming out before Reaver (like Singularity and Glitchpop), so we wanted you to feel like we gave Reaver the same love we gave those other skins. If Reaver was going to come back from the dead, we had to make sure we didn’t disappoint!

Of course, this meant we were pretty worried about whether Reaver’s second act would be good enough. What we never expected was that Reaver wasn’t just a throwback for Closed Beta folks; instead there was a whole generation of new players who fell in love with it for the first time.

Suddenly, instead of getting messages from you to “bring back Reaver,” we started getting requests for MORE REAVER SKINS, especially a Phantom. So the next step was obvious.

REVIVED FROM THE DEAD, AGAIN

The truth is that the re-release of Reaver was tough because we weren’t sure how it would play out, and we knew that doing a second set would raise the stakes. There’s a very careful balance here of capturing the true essence of what Reaver is while still making it feel like it’s better than what we made before. It’s contradictory and confusing, so let us explain.

Before we started any work, our first step was to ask ourselves “what is Reaver?” It sounds basic, but we really needed to think about what makes Reaver special. We had to be thoughtful about what players love about Reaver, and not just bang out a checklist—instead, we needed to describe what Reaver makes you feel.

In other words, when you’re wielding Reaver, who are you?

Reaver should make you feel like a necromancer, a corrupted mage who summons dark magic and performs forbidden rituals in the shadows. Every equip, reload, and kill harnesses the power of its mysterious runes, fueling you with its dark energy. Do you feel its power?

Everything about how we made Reaver comes together in a way to immerse you in its fantasy, almost like you’re playing an entirely different game in a completely different world. 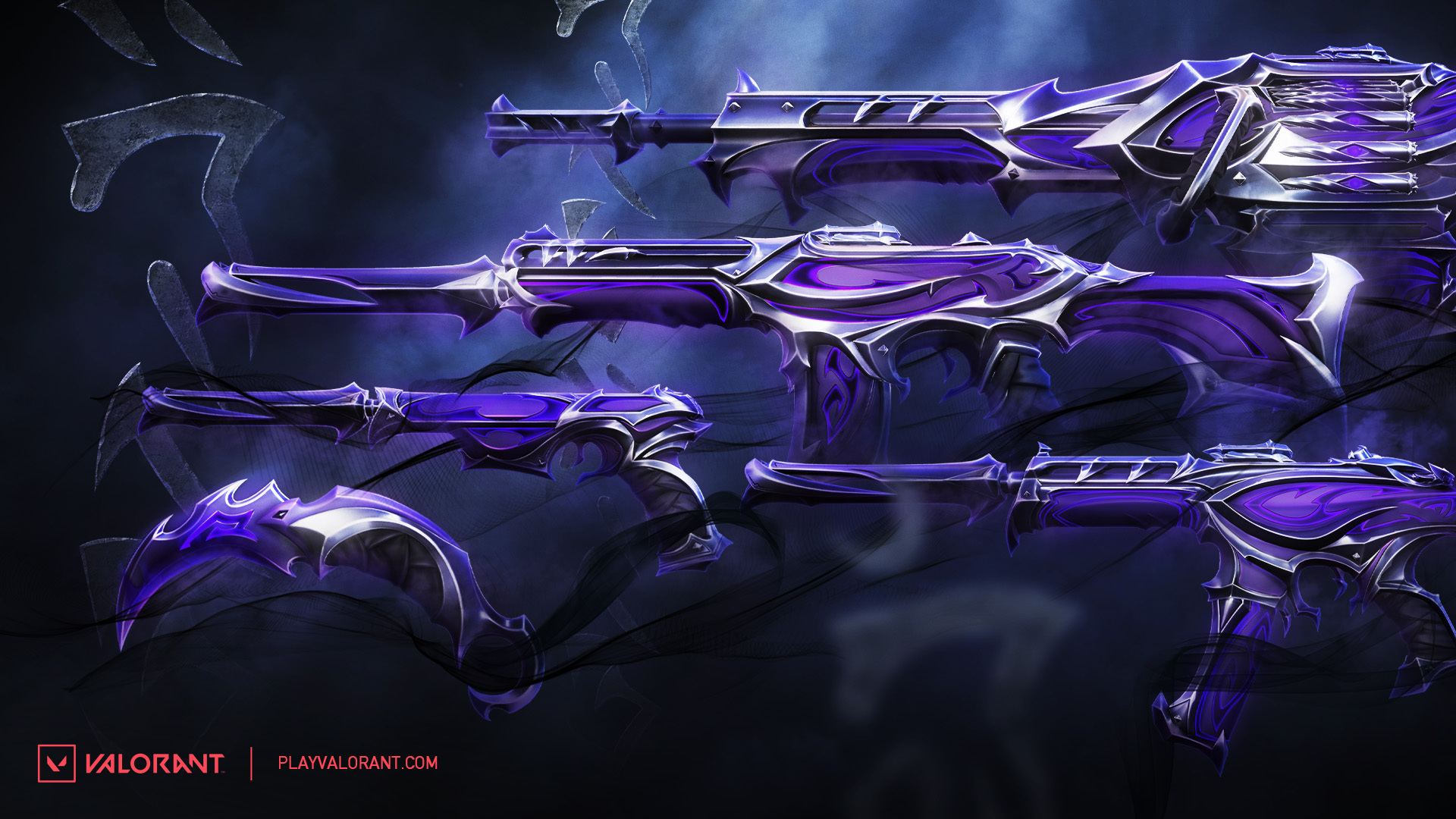 A lot of what makes Reaver appealing is its concept or “design,” which serves as a guide for what the model should look like—the thick-but-flowing shapes, sharp angles, and glowing runes. It’s the canvas that sets the direction for the skin.

Next came the animations, which is where the visual effects and audio build from. Looking at the original Reaver, we found ourselves referencing the very deliberate, slow, and methodical animations of the original Reaver weapons. They’re telekinetic and have a certain “possessed” feeling. They’re not theatrical or showy, and they’re definitely not a magic trick. While you’re reloading, you should feel like you’re summoning the power of its magical runes, but you should also get a sense of uneasiness. Almost like you’re not sure if you can contain its immense powers. You know the whole existential crisis of am-I-a-force-of-good-or-an-agent-of-evil that we edgelords all face.

In terms of visual effects, something you may not realize is that we very rarely use a pure black color in VALORANT even for our skins. In this case, our VFX artist Stefan Jevremovic felt like the best way to convey the ominous and chilling nature of Reaver was to lean heavily into pure black alongside darker colors as accents.

You can see this most clearly with the muzzle flash, which Stefan described as “totally black, like black-black, like buh-lack with maybe a hint of dark purple.”

Finally, something a lot of you tell us is that you love how Reaver sounds—the ghostly reverberations, the deep unsettling tones, and the bell resounding with the kill banner. The audio is the final touch that gives Reaver its haunting, ghostly quality.

We considered all of these elements when designing the Phantom, Ghost, Spectre, Odin, and the karambit melee because each brought its own unique challenges. The original Reaver didn’t have any silenced weapons, yet this set had all three. How can Reaver fully envelope you in its haunting atmosphere with silenced guns? Can the Phantom have the same resounding energy of its louder counterpart, the Vandal?

The Vandal and Operator are some of our most powerful-sounding weapons and have such large shapes for their muzzle flashes. Can the silenced guns live up to those visuals? It was important to us that you could put the Phantom next to the Vandal and still feel like they’re part of the same set, as if they’re equals.

For the melee, we thought the assassin-style dagger in the original Reaver set was perfect. It’s stealthy and badass, and our self-identified edgelords/Omen/Fade mains loved every bit of it. This meant we thought a lot about what style of melee would be “worthy” of Reaver this time around.

We explored a lot of ideas, but we kept coming back to the karambit. It’s low-key flashy and stealthy at the same time, and it’s something we felt was really special and desirable. And this time around, the melee would have variants!

BETTER BUT TRUE TO FORM

Bringing back a fan favorite is never easy, especially when it’s one that also holds a special place in our dark hearts. Our Art Lead, Kerwin Atienza, wasn’t part of the VALORANT dev team when we released the first Reaver, but we tasked him with the challenge of leading the artists to create the second Reaver set. We both told Kerwin that we’d keep a very close eye on Reaver, so our feedback would probably feel very nitpicky and unfair sometimes, but we would only be so annoying because Reaver has to be just right.

We’ve seen so many of you in our own games use the OG Reaver skins and it’s been such a thrill to see pros use it during esports tournaments (remember, we weren’t even sure if our top players would want to use premium skins due to gameplay concerns). And we’ve put so much love and care into this skin set in hopes of pleasing all of you. That’s why we hope to see you all fall in love with this new Reaver set just like we have (especially the karambit white variant, which has become a dev team favorite—we literally got a message today that said “it is so sick holy smokes”).

We don’t have plans to make more skins for an existing skin line (Spline 2.0, anyone?), but depending on how Reaver goes and what feedback we hear from the community, maybe we’ll consider doing more!