VALORANT First Strike: Europe – Everything You Need To Know

Ready up, agents – the first Riot-produced European VALORANT tournament is on the way. VALORANT First Strike: Europe will be an epic test of skill and teamwork, as the best players in the region compete for glory and a share of the $100,000 (€85,000) prize pool.

The event begins with open online qualifiers from 9-22 November. You’ll need a minimum of five players and one substitute to compete, with a three substitute maximum. Once your team is assembled, you’ll need to register to take part.

How do I register?

Head over here to register for the tournament, where you’ll also find all the info you need to sign up. Registration opens at 09:00 Central European Time on Monday 26 October – be aware that daylight savings will change the time from CEST to CET on Sunday 25 October, so ensure you keep an eye on the right time.

You will have two chances to register for the open qualifiers, which run from 9-22 November.

The open qualifiers are split into four separate tournaments, two per week. Teams aren’t tied to any single qualifier, so if your team gets knocked out in the first qualifier, you will be able to try again in the remaining qualifiers.

Winning teams will then advance to the play-in stage, as the contest heats up. As with the qualifiers, this is a best-of-one single elimination, with the top eight teams advancing to playoffs. The playoffs will be a best-of-three format, with the top four teams proceeding to the main event.

Click the graphics below for a closer look at the tournament structure. 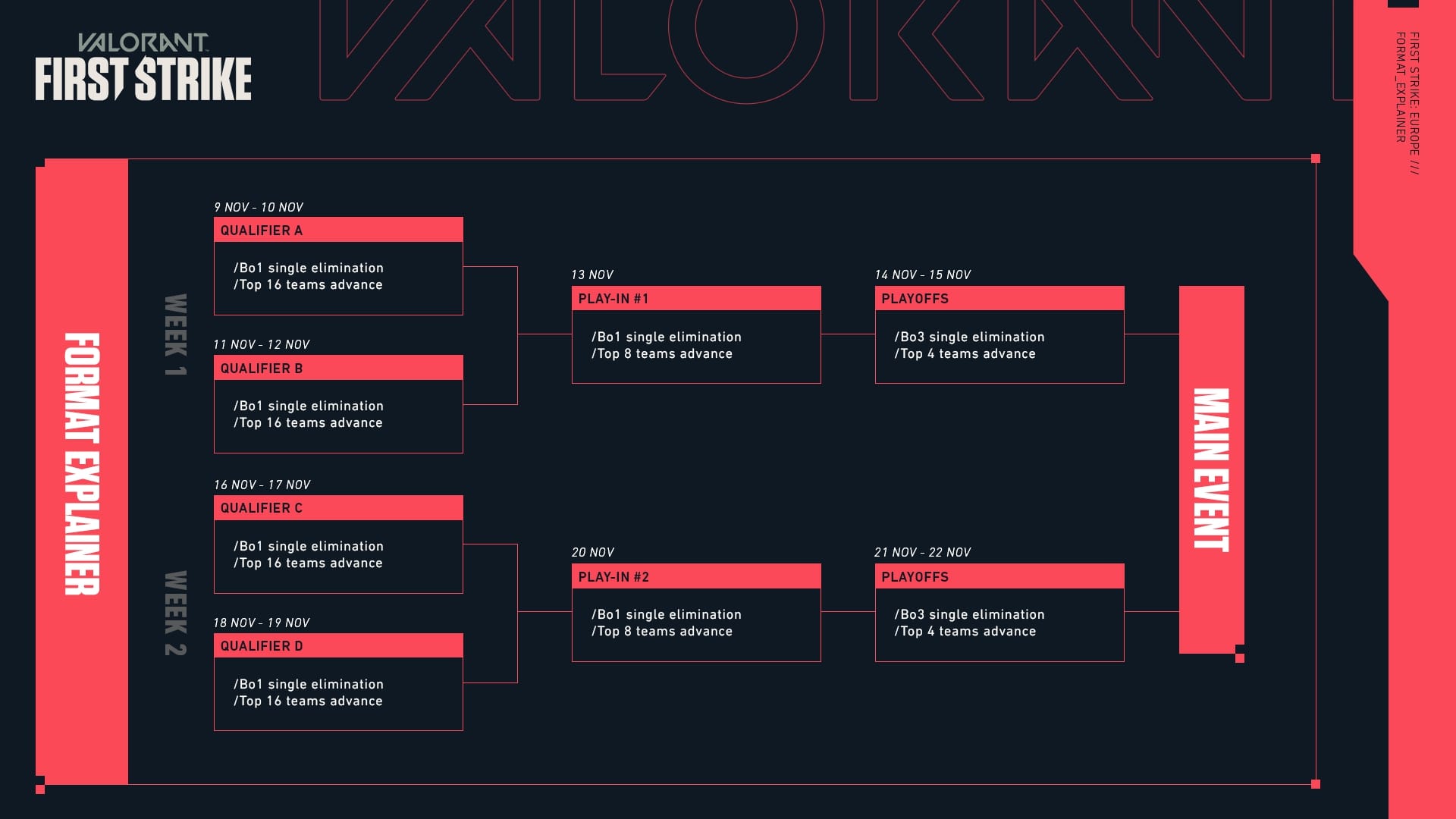 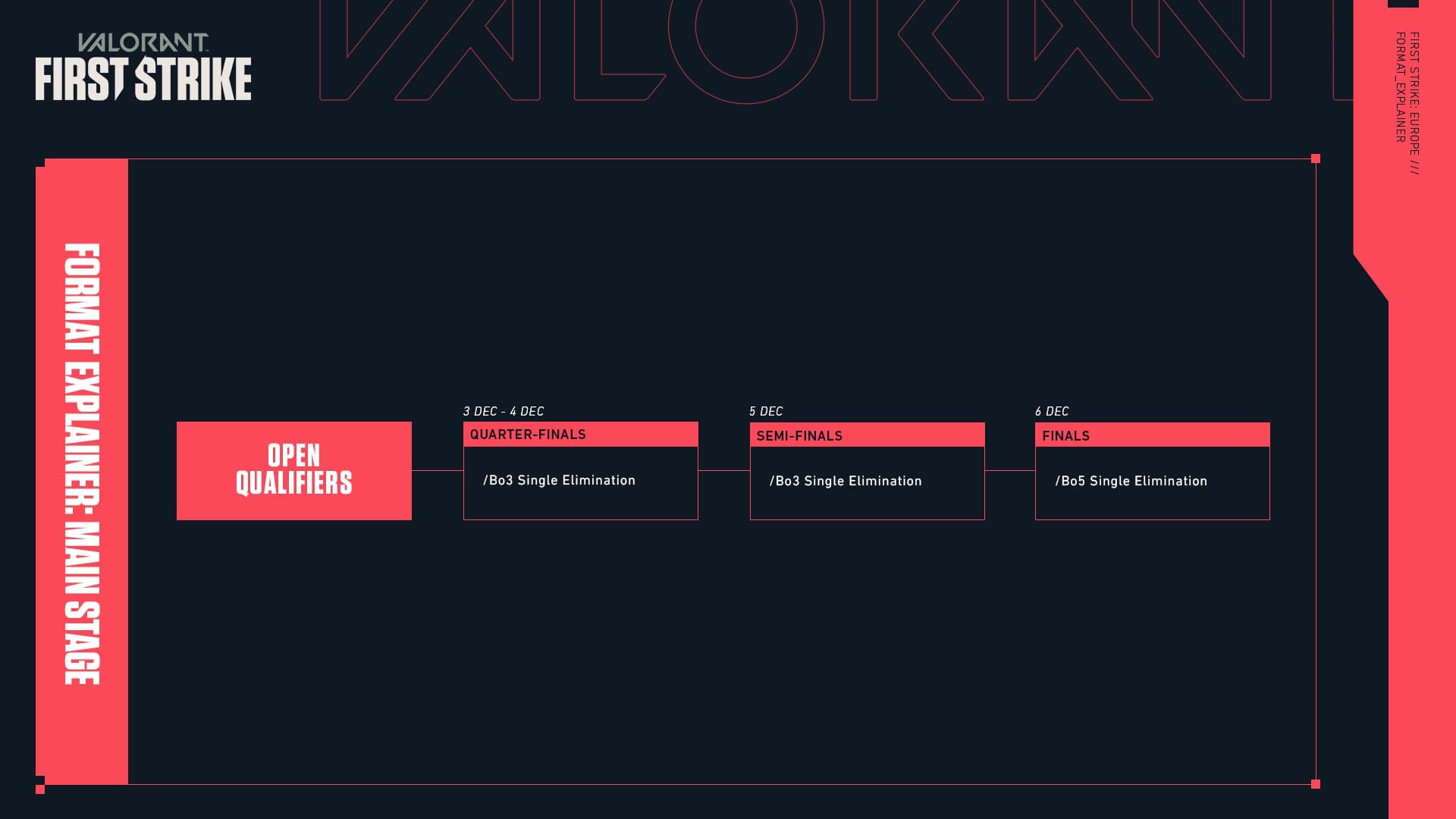 The map pool for the qualifiers will be Haven, Split, Ascent, and Bind. Icebox will enter the pool starting with the Main Event on 3rd December.

Head here for more information about the tournament qualifiers.

For this historic tournament, teams will be competing for a share of the huge $100,000 (€85,000) prize pool. The winnings will be divided across the top eight teams as follows:

How can I watch?

Not ready to compete? You can still join in the fun, and maybe pick up some new strategies by watching along. Both qualifying week’s playoffs will be broadcast live on 14 and 15 November, as well as 21 and 22 November, at 17:00 CET. The entire main event will also be broadcast, starting at 17:00 CET for each day of the tournament. Stay tuned for the official channels to drop in the coming weeks.

What else do I need to know?

Thinking about competing? Make sure you take a look at the official rules for competitive VALORANT esports so you're clued up on what to expect at the main event, and read the qualifier-specific rules on the signup page so you don't get caught out in the early stages.

And this is just the beginning for competitive VALORANT. If you don’t make it past the qualifiers, study the pros, hone your skills, and try again next time. Good luck, and have fun.

*Editor's note: Changes made to prize pool breakdown and Israel is now included in the European region for this event. Updates made on 27th October.

Diego joined Riot 10 years ago and likes to reminisce about the "good old times" when he was good at games. He has a strong suspicion that people continue to invite him to meetings only to see his corgi: Orion