This is the patch where we humble the Stinger by adding a degree of mastery to the weapon, rather than leave it potent in one too many areas. The Marshal and Frenzy also get respective price adjustments.

As forecasted in our State of the Agents, Yoru gets his first set of balance changes with the hopes of getting him closer to his intended impact and performance. Reyna’s Devour and Dismiss was running wild round-over-round, so those charges have been reduced. Don’t worry Reyna-maniacs, she’ll now get Soul Orbs from anyone she’s recently damaged, even if she didn’t land the kill shot.

Don’t forget the newest game mode, Escalation, goes live. You can read more about how it all works in our story. 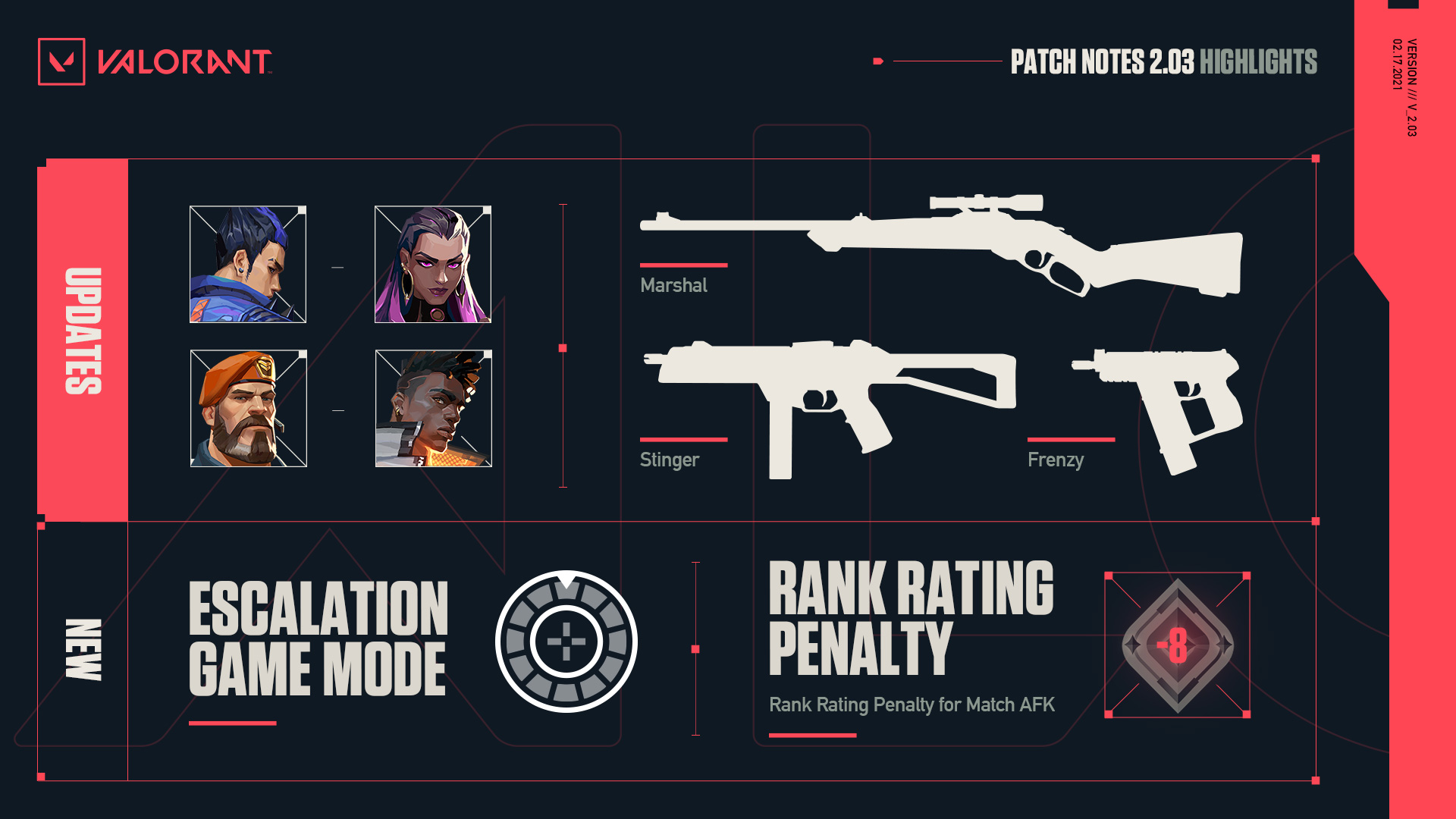 Reyna gets a dual nerf and buff in hopes of reigning in some of her “pubstomp” potential, while still keeping her viable in balanced and coordinated play. The charge reduction should limit how much impact she can have round over round when she’s heavily out-gunning her opponents—but allow enough room for the 1v5 dream when Empress(X) is active.

The price increase of Devour and Dismiss in tandem with the Frenzy price increase (see below) should also push some tougher economic decisions during pistol round. Now, she’ll no longer be able to buy a charge or Leer(C), her Soul Orb abilities, and upgrade her pistol. On the flip side, Reyna getting Soul Orbs from recently damaged enemies should help her reliability when playing around teammates, and reduce the animosity when an ally lands the final blow and Reyna goes empty handed.

While we investigate future changes to Yoru that target his power and ability to achieve his core promise, we wanted to make a few changes that we felt would improve his use today. Gatecrash wasn’t providing much information about when enemies could see or hear his teleport fragment, so we added a few pieces to make that easier. As far as the ultimate, we’ve noticed a burden on Yoru having to communicate threats between his allies and his destination and wanted to make it easier for him and his team to understand the state of the round when they set up the ultimate pincer.

We wanted to sharpen the Marshal’s strength as a sniper with a movement speed buff when zoomed. The intent is to carve out a strong, agile, hit-and-run identity for the weapon. There’s a price buff too, because the weapon is not as versatile as others in its range.

The Stinger’s been strong for some time and while we like that it is threatening at any stage of the game, it’s proved to be too potent in too many areas. We’re taking a swing at raw DPS with the fire rate reduction (full auto only) and made spread and/or recoil adjustments to both firing modes. The intent is to better designate optimal ranges for the respective firing modes as well as introduce degrees of mastery to the weapon. The price increase is meant to bump the premium a bit on the Stinger’s now nerfed, but still potent, versatility.

Frenzy has surged into popularity recently and while we’ve enjoyed to see that, it feels like it’s pushed out a lot of other options on pistol rounds. We’re interested in seeing what a price bump does to purchase rates. As usual, we’ll monitor this weapon for any follow up tuning.

For more context around these changes, read our overall E2: A2 rank plans.

Two changes have been made specific to the death sequence, that is, all the stuff that happens once you are killed and before you become a spectator from beyond. We hope these changes improve the experience and game feel by addressing the smoothness of camera movement and general timing of the sequence. We cannot, however, bring you back to life. That’s Jett’s job.