We’re reaching out from the Competitive Play Area—which consists of three teams: Competitive, Social & Player Dynamics, and Core Services—with a sincere thank you for being an amazing community and to give a look ahead into some of our plans for 2021.

From chat, voice, friends list, your into-game flow, ranked, and managing a live service; our area aims to create a space where you can feel welcome in-game, whether you compete or just play. We can’t thank you enough for your continued support and feedback, which has been immensely helpful in us improving our game and service.

Let’s talk about our ranked system! While we’ve built other features this year, we know that a lot of you are most passionate about being VALORANT in VALORANT (right?) and want to hear what’s next. Jokes aside, over our first couple of Acts you’ve all given us detailed feedback around our systems, which led us to update our rank names, iconography, ways to show off your skill (whether in-game or via some braggadocious Tweets) and dozens of changes and tweaks to our Matchmaking and MMR systems to reduce queue times, improve match balance, and help you get your preferred server (use that selector!).

Next year it’s going to be about making some larger changes to our core ranked system so that players have an opportunity to prove if they are the best of the best, earn cool rewards, and provide a better sense around your rank changes. Gotta be coy here, but later next year, we plan to create a way to prove your skills and see how you stack up as a team.

Let’s take a quick look at some of the progress on this work. Looking forward to climbing the ranks with you all in 2021! 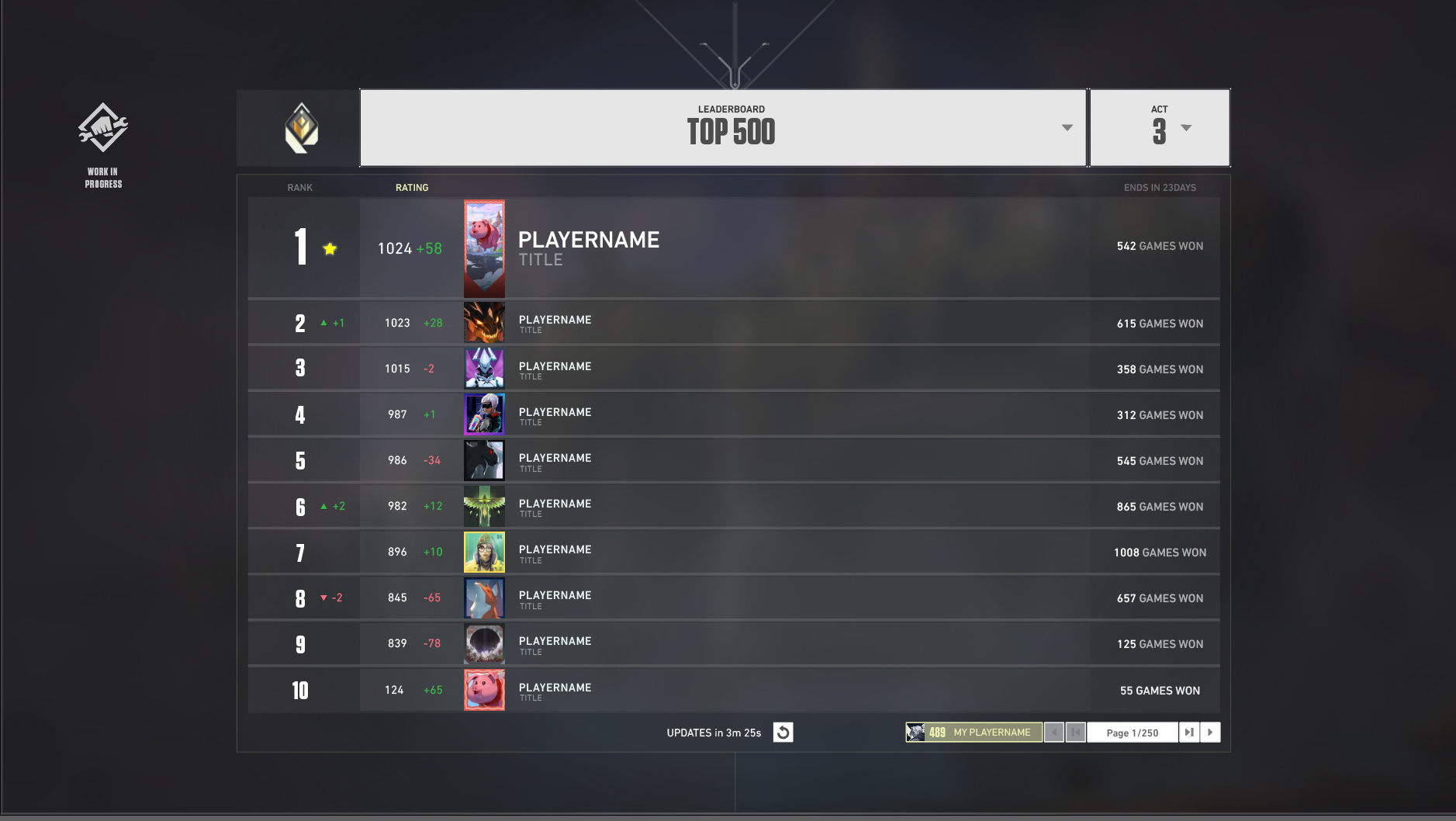 Thanks again from all of us on the Competitive team,

Hi friends! This may be the first time you’re hearing from us, so let me introduce ourselves.

We’re a new sub-team that recently spun up on VALORANT, and our goal is to make your experience in VALORANT a smooth(er) one. We own all the social features in game, but we also take a particular interest in player behavior. I’ll get into this in a second, but I want to let you know that as we’ve been ramping up in this space, we’ve been hard at work delivering some quick wins for you all that you’ve hopefully come to notice: friend notes, reworked party toggles, away status, etc.

Let me get into some of the areas we’re going to be looking into in 2021:

We’ll have a lot more details to come, but 2021 is going to be a big year for us and we’re looking forward to all the exciting changes to come. In the meantime, we wish you the best of games, the highest of ranks, and a steady progression in your Battlepass rewards :)

Hope we bump into each other in game sometime!

Thank you all for the vocal feedback all year!

It’s been immensely helpful as we’ve navigated the often murky world of infrastructure optimization. This was a huge year for the Core Services teams, as we rapidly responded to capacity needs and latency fixes through our Closed Beta into our launch. We’ve added nearly 40 game server pods across 17 countries in 5 continents while building up our service capacity.

The Core Services group also helped support multiple age ratings and government submissions requirements that helped us launch on time. We also found some time to build out our 3rd party API to help an early group of non-Riot folks build out some awesome sites. On top of this, we’ve supported 19 player-facing patches every two weeks, and have built up the capability to release without requiring taking downtime outside of Act releases!

Next year we’re looking to continue to improve stability and latency for players. We’re hoping to add a few additional server locations, as well as focusing on building out our Player Beta Environment and our Tournament Realms to fully support the growing esports scene.

Thanks from all of us on the Core Services Team!