How the VALORANT Arsenal was built

Hey VALORANT sharpshooters, I’m VALORANT Art Lead Sean Marino here to talk about everyone’s favorite topic: the guns! Specifically, discussing what defines a VALORANT weapon and how we brought these principles to life in the game. First, let's start with this quote from Trevor Romleski, lead game designer.

This phrase was something that we latched onto early to help define the gameplay pillars and visuals of the VALORANT weapons. It was the foundation for how we would flesh them out within the game.

First came a pledge to uphold certain standards of the genre. With a tactical shooter, there are expectations around gameplay and weapons that we strived to sustain, regardless of what the VALORANT IP would become.

Then we cemented a “gameplay first” approach. Let’s create a gun for every situation. There should not be an overpowered or “best” weapon in the arsenal. It should be all about trade-offs between power and economy. No weapon should feel like it only exists to troll, or have no imagined use scenario. Likewise, guns that felt redundant were also removed (ask us about the Otto!) 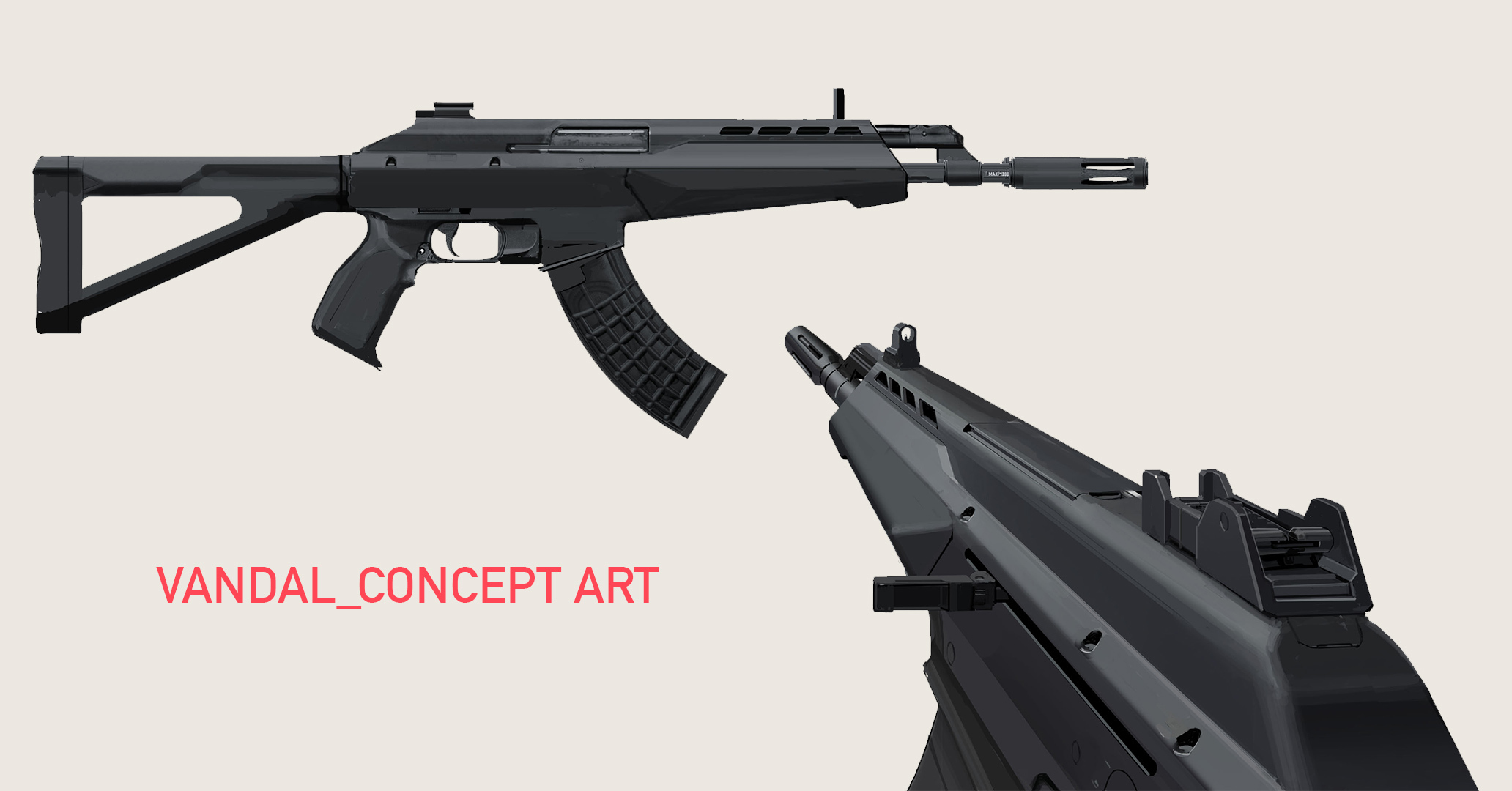 Very early we tried an approach where every weapon had to be more radically different than the last, in terms of art, functionality, etc. But we had lots of weapons to build and this was not sustainable. Out of this trial, we came to these four weapon pillars:

Players should be able to look at a VALORANT weapon and make a connection to what may have inspired it—either visually from the real world, or gameplay-wise from games within similar genres.

Bullets. No lasers. No “pew pew.” Yes, gameplay has to be taken into account for balance in terms of damage and such, but ultimately, audio, muzzle flashes, and animations need to reflect a tool that delivers bullets into objects.

As it relates to weapon animation, the player’s interaction with the weapons are meant to depict intention and precision. Picture how a professional knows their way around a weapon—reloading, handling, etc., every movement reflects thousands of hours of training.

The origins of our weapons can be traced. That is, we avoided creating mixed “factions” that would show disparate design languages. This was an early decision to not have “A vs B” sided gun designs for VALORANT. 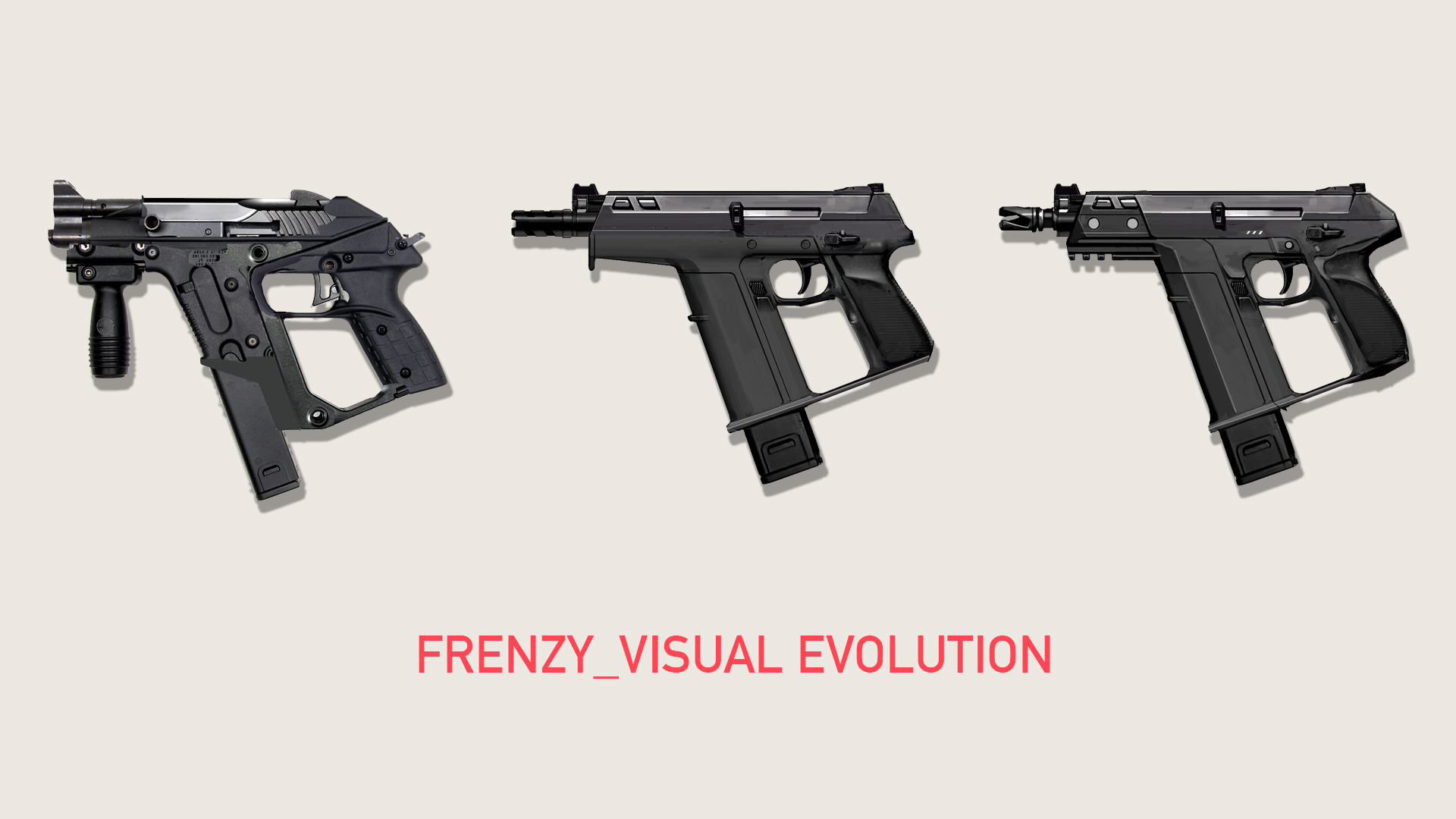 We began each weapon’s visual design by creating a mashup of guns that fit the gameplay, and made sure to callout key identifiable features that separated each gun from the others. Simply put, players should be able to look at the full arsenal and not confuse one gun for another.

In both first-person and third-person perspective, there should be a unique visual marker per weapon that tells the player immediately what it is. This includes something as basic as the silhouette shape, or smaller details like magazine placement or charging handles.

Similar to what we discovered early on by trying to reinvent the wheel with weapon identity, we realized we slightly overcorrected and swung too far in the opposite direction. This led us to create animations—and associated audio cues—that are both recognizable and learnable.

Sean McSheehan, lead weapon animator, helped design each weapon to have its own recognizable “beat” pattern. Some weapon equip animations have a two or three-beat step for reloads, for example. It’s case-by-case, but something players can watch out for. See, but also listen. These beats indicate to a player what state their gun is in, and when it is ready to fire. 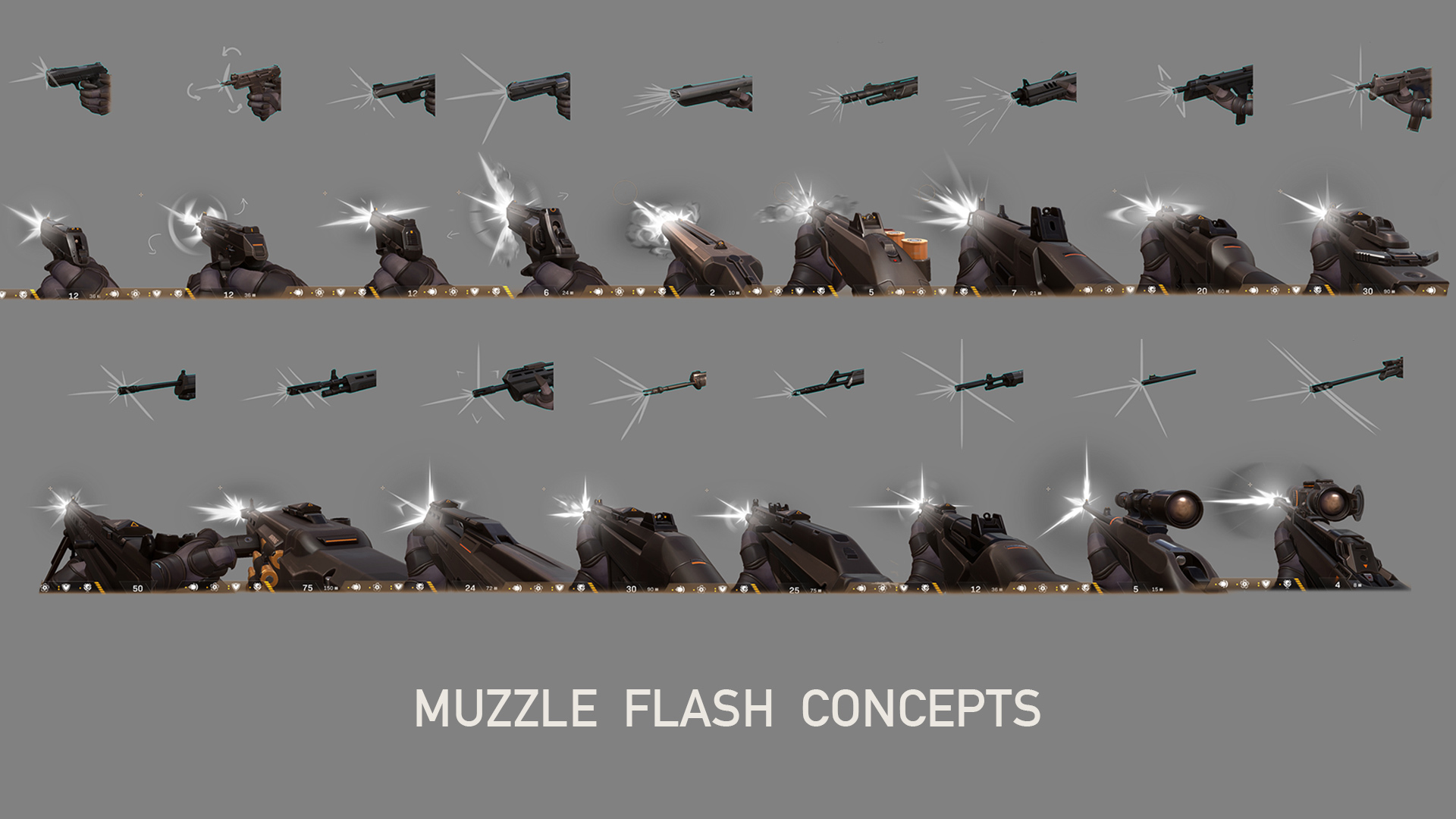 In the same vein as weapons, lead weapon VFX Artist, Stefan Jevremovic, wanted to include a visual differentiation for effects like muzzle flashes in both first-person and third-person perspective—sort of like a language dialect for each that reflects the shape, use, and power of the weapon.

VALORANT is a game of angles. With the help of VALORANT Audio Director Peter Zinda and Sound Designer Isaac Kikawa, we recorded weapon audio so that their third-person perspective sounds change based on their direction of fire. Simply, guns give off a different sound based on whether they are firing toward you, to your side, or away from you.

How did we do this? Well, if we’re using the real world as inspiration, you know we had to include the obligatory audio capture sessions to gather as many sounds as we could for each. Hammer strikes the firing pin? That’s a capture. Magazine releases? That’s a capture. You get the idea.

We also used Riot's foley stage to capture all the surface based sounds, like footsteps, bodyfalls, shells dropping, magazines dropping, etc. We wanted to make sure they sounded consistent, because recognizing sounds on surfaces provides clues to the direction of the noisemaker.

Some weapons were designed to have an attachment, such as silencers, scopes, and such. For this, some of our team members felt it might be an interesting system if we allowed attachments on any weapon.

But after many rounds of testing, we found that certain guns had “preferable” or best-in-slot attachments, and players never really changed them once they found the ones that yielded the best gameplay results. That’s when we decided to take the stat benefits from those and just bake it directly into the weapon.

Voilà, now the Ghost has a silencer.

Speaking of which, Silencers were the last baked-in attachment we made. Not only do they allow for further visual differentiation between weapons, they include some gameplay benefits. Silencers give a weapon's firing sounds a smaller attenuation than the other guns, unless they are firing toward the listener, in which case they are audible at any range. This prevents situations where players could be killed by a gun they didn't hear, but also gives silencer users some information denial.

Another example. There’s a meaningful differentiation between the Vandal and the Phantom, which helps one not be the definitive "better" of the other and is instead based on gameplay decisions. In other words: it depends on what you want. Like shooting through smokes? Buy a Phantom. Prefer to one-tap at a distance? Vandal is your friend.

A fairly large point of contention on the team was whether we would allow for aiming down sights, or ADS, with our attachments. In modern shooters, this is a common and mostly expected thing, but in traditional tac shooters this was not.

Trust us, many post-team dinner chats were dedicated to the value of ADS. We left as friends but there were clear "ADS" vs. "hip fire only" divides in some cases. Obviously, we had to solve this, not just to accommodate different shooter players, but find a solution that didn't disappoint advocates on either side.

The solve was done in two parts: One, allow for players to opt into an ADS playstyle if they chose, providing no clear gameplay advantage over hip-fire like you may see in other games. Two, we would keep the attachment design minimal, so that it did not interfere with the visual real estate of the weapon.

We also found that adding big “red dot” or ACOG-like attachments made the guns feel bulkier, and ultimately covered more area of the screen during hip fire, making it feel disadvantageous to the shooter. Our first “tech” attachment was born, a red dot that projected a holographic sight picture. While not quite a grounded-in-reality type device, we felt like we were far enough along with the VALORANT IP to know how technology would organically manifest, and this sort of gadget attachment felt like an appropriate compromise for our visual as well as gameplay concerns.

We’re not done with weapons just yet! Keep watching this space for an inside look into weapon skins.