The Craft and Fantasy of VALORANT Weapon Skins

Hey, VALORANT! I’m Preeti Khanolkar (Producer), and I’m here to talk to you about how we bring weapon skin fantasies to life while staying within the boundaries of VALORANT’s competitive integrity. Together, Sean Marino (Art Lead) and I run the Premium Content team, which is responsible for all the cosmetics you see in the game: weapons skins, gun buddies, sprays, and more. But today, we’d like to focus just on weapon skins!

Last week, Marino outlined our principles for weapons: A gameplay-first approach with a gun for every situation. And that’s not changing, even when your Vandal spits molten fire or blasts sleek sci-fi energy. Our goal for skins is to give players another way to express who they are and what they love without ruining another player’s gameplay experience.

We'd like to give you a behind-the-scenes peek at how we work so you can see how we design skins not just for personalized expression, but for appreciation—to immerse you in your chosen fantasy. And if you want to dive even deeper into your skin’s fantasy, we’ve created evolutionary tracks for several skins that add custom anims, effects, audio, and more to strike the right emotions and feeling—your fit, your choice.

THE FIRST DROP OF INK 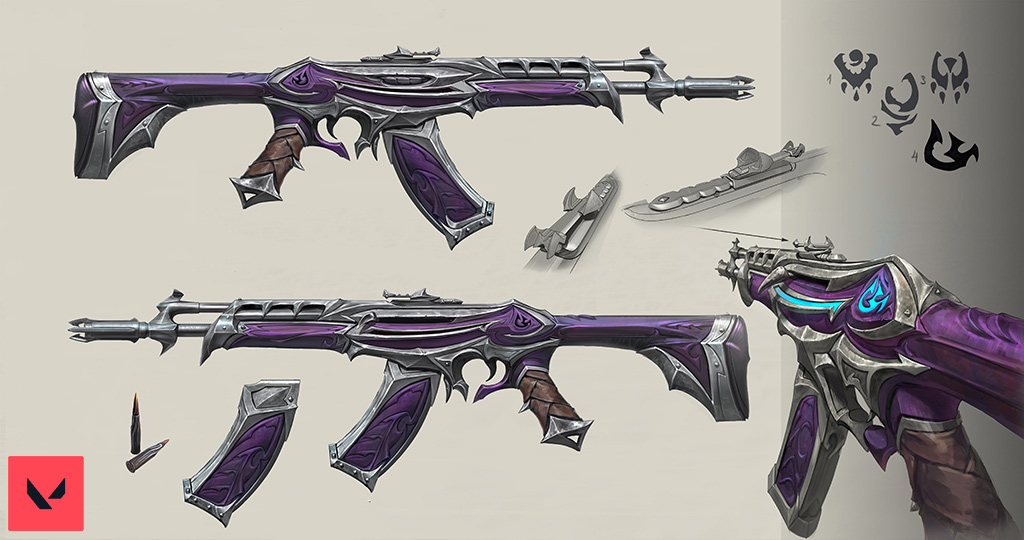 A fresh coat of paint on your favorite weapon is great, but what more can we do to make you feel an alternate fantasy. And how far can we push it? This far? Yes. That far? No, stop it. That’s the balance we’re always looking to strike.

But before we fall in love with a skin idea, we ask ourselves how we’d execute something like that in VALORANT and whether or not that’s something players even want.

Who’s this for? We don’t make skins for us; we make them for you! That’s why our amazing research team combed through tons of player surveys and lab feedback to see what kinds of themes you want to see in VALORANT. For example, should we lean into traditional sci-fi, high fantasy, sleek modern aesthetics, or create something totally abstract?

Then the idea. Sometimes a random piece of art will grab us, or a quick sketch from a concept artist, or maybe we expand on something we’re already passionate about. The whiteboards covered in over 130-sticky notes prove no idea is too wild. We take inspiration from improv and always ask “yes, and?” (and never say “no, because”) when we’re in the earliest stages of brainstorming. Still, how do we distinguish between guns that get the "all-in" fantasy treatment and those that don't?

Five questions. A small group from our team—the ones who feel most passionate about the idea and are willing to fight for it—kicks off the ideation process. This is where we flesh out the vision based on the imagined world and desired fantasy. We found that answering a few questions at the outset helps our guide our thinking:

Without answering these, we’re stuck in a place where we’re thinking “Is this a rock? Is it an alien? Is it futuristic technology? Or is it futuristic technology that aliens made out of rocks?” We don’t want to start making a skin line without clarity on what we’re actually trying to make. That’s why answers to these questions help align the team around a cohesive, unified vision that ties the whole experience together.

KICK IT TO THE TEAM 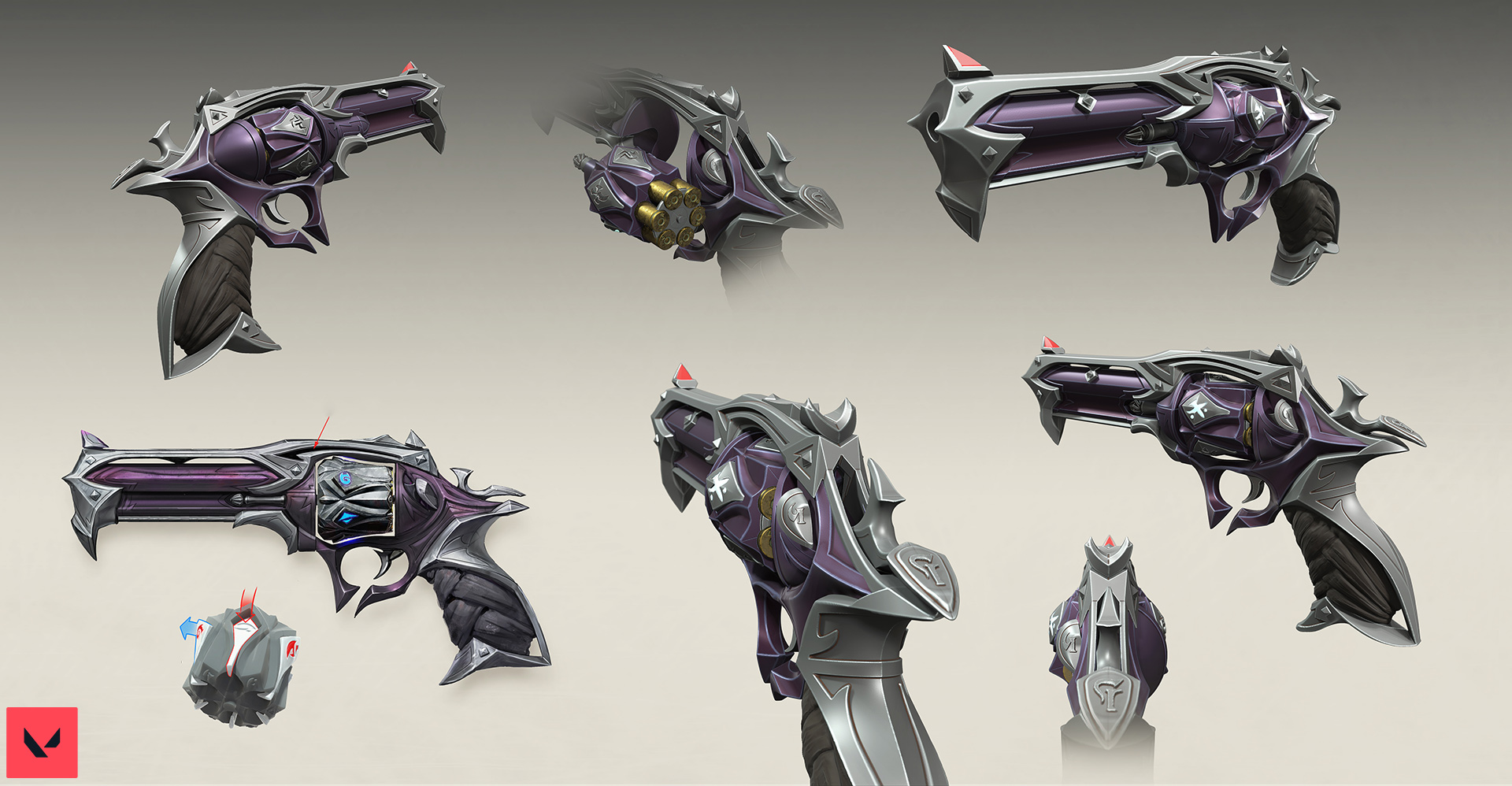 First, our talented concept artists take the team’s abstract (and sometimes insane) idea and references to create the skin’s first concept. Through some back-and-forth, they arrive at a final concept for the skin line.

The modeling process begins in earnest after we bring the concept to completion and agree that it hits the desired fantasy, is something we can actually create, as well as fits within our strict gameplay constraints. For example, we make sure that the skin model matches both the 1st-person and 3rd-person silhouette of the base weapon, and it’s recognizable when on the ground.

Animation on a skinned weapon should also mirror the beats of the base weapon. The goal here is that no skin makes a weapon feel unfamiliar. Using a new skin should never mean having to relearn a weapon: it should fire the same way, never feel slower (feeling faster is okay, but actually being faster is unacceptable), and it shouldn’t take up less (or more) space on your screen.

In extremely rare cases, we make an exception and break some of these rules if the fantasy absolutely requires it (you’ll see what we mean!). For example, maybe the skin takes up just a little bit more of your screen during the equip animation. But we only do this after lots of debate, tons of testing and iteration, and after we have explicit design approval. And as always, it’s never pay-to-win.

Your focus in VALORANT is to frag, plant or defuse the Spike, and take home the win with style. This should not change with weapon skins (except maybe some fun pre-round spamming and inspects). Thus, any visual effects tied to a weapon skin should look really awesome, but never distracting.

Weapons will keep their base muzzle flash shape and scale, bullet tracers can only be seen from the shooter’s 1st-person perspective, and aiming reticles will stay clean and easily readable when you ADS.

Audio is one of those things that really cements the entire fantasy of a skin, but it’s also one of the most important parts of VALORANT’s gameplay. We never want you to think you failed to clutch a round because a skin caused you to miss a critical sound cue.

This means that if new audio is part of a skin, we make sure it’s not any louder or quieter than the base version, but it still pops in a noticeable way. If you’re relying on audio for your spray control, we don’t want new firing sounds to mess with that.

We always make sure there's a sound paired with gameplay-relevant points in the animation, for example, when ammo is loaded into a gun. We do our best to maintain the timings of when these animations make sound, and when they go quiet.

If we're adding sounds during what are otherwise moments of silence in the base version, we do it to delight you and bring something awesome to the skin's theme. However, these purely cosmetic audio elements have their volume ducked by more important gameplay cues around you.

What does this mean? Let’s say you’re hiding behind the truck on Bind A site. You want to reload your Reaver Vandal, but you’re worried that the ghostly reload sounds might block out the enemy Sova’s footsteps as he approaches the site from spawn to defuse. WORRY NOT! Go ahead and reload that Reaver Vandal, knowing that the right audio cues are always being prioritized. 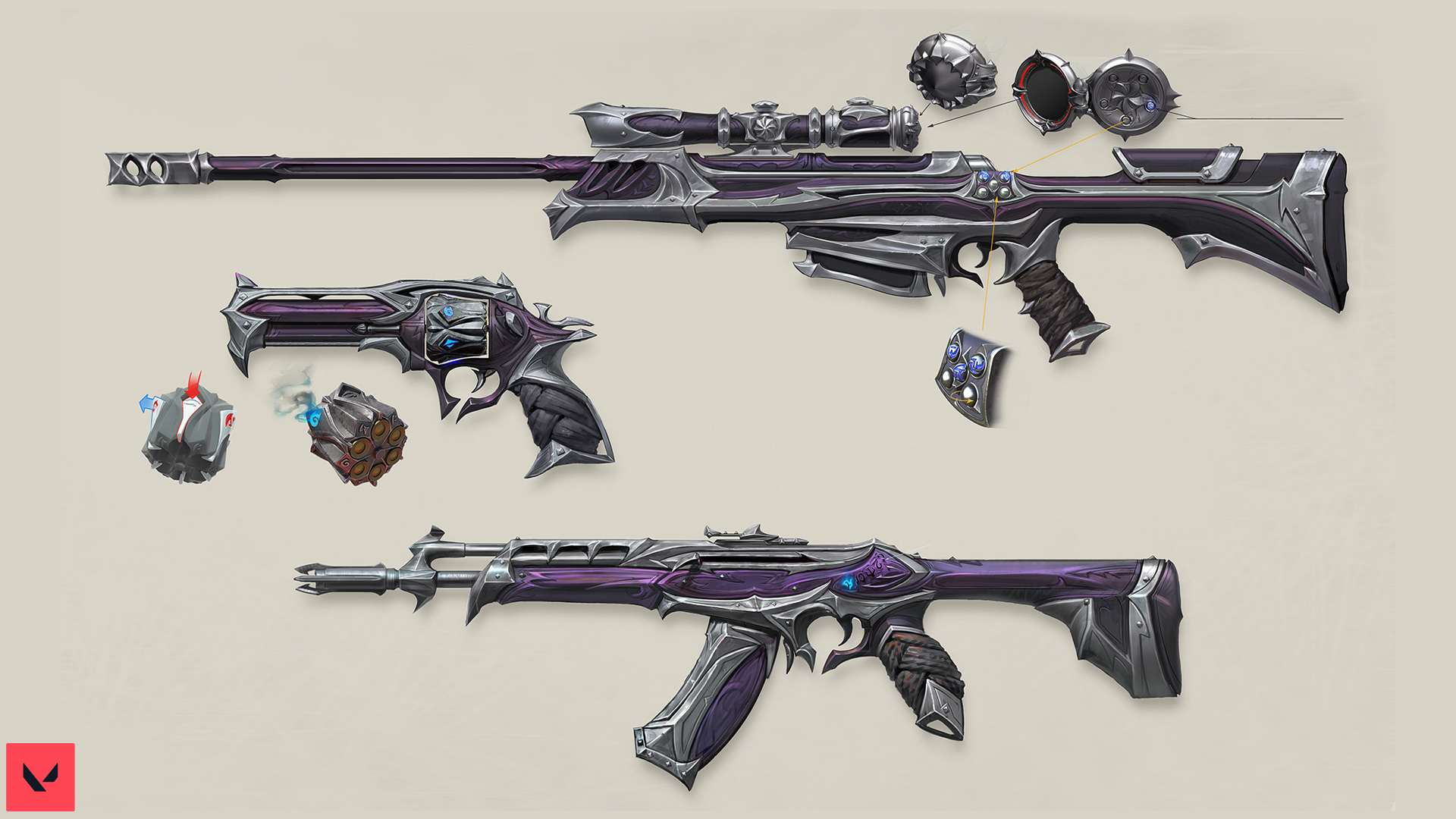 We test everything, and we mean everything, with the team in our Design Playtests (DPT)—our twice-a-day playtest where designers experiment with all of our new features like maps, characters, and you guessed it, skins.

This is where the imagined skin fantasy and commitment to gameplay go through extra scrutiny. Every skin enters rounds of feedback to narrow in on the fantasy without pushing it so far that it violates our commitment to competitive integrity. The DPT crew are our harshest critics, and we love them for that. Here are some examples of helpful feedback we’ve received that helped us make our skins better:

Apart from DPT testing, we also identify “expert consultants” on the VALORANT team who love the aesthetic we’re hoping to hit. If we’re making a high fantasy skin, we want to make sure our most dedicated fantasy nerd who should like this skin actually likes it. And if they don’t like it, or think it could be better, we want to hear more.

DID WE DO IT RIGHT?

Ultimately, we’ll only know if we’ve made the right skin in the right way once you tell us. VALORANT is still in closed beta, so we’ll learn so much more once we’re actually a fully live, global game.

In the meantime, the glimmer of hope we get is when Sal Garozzo (Volcano) interrupts us at 9pm to tell us just how much he loved a certain special firey melee he used in DPT that evening.

If Sal likes it, maybe we’re on the right track.