Aside from the below, don’t forget the rest that is coming as part of Episode 3 Act I, which you can read about in our summary. Now a word from our design leads:

While there are a lot of changes with this patch, they are focused around refining two critical components of the game: Increasing the importance of precise gunplay and expanding the tactical sandbox.

When we think of VALORANT, we consider every map, weapon, and character to be a part of an ever-changing sandbox where you can use your skill and creativity to overcome any challenge you face. We believe VALORANT is at its best when you face a wide variety of unique challenges and are forced to make hard choices about tools and strategies you’ll use to overcome them. To that end, we have taken a pass at the entire economy of the game, changing weapon and ability prices so they better suit their impact on a match and allow players to create more dynamic, varied loadouts, and strategies.

Game-spanning changes like these can be painful as we are asking you all to relearn many things that you’re now comfortable with. There will be times when you are forced to make harder choices about what you bring into battle each round or forced to engage with an opponent differently—but just know that your enemies are facing the same challenges. 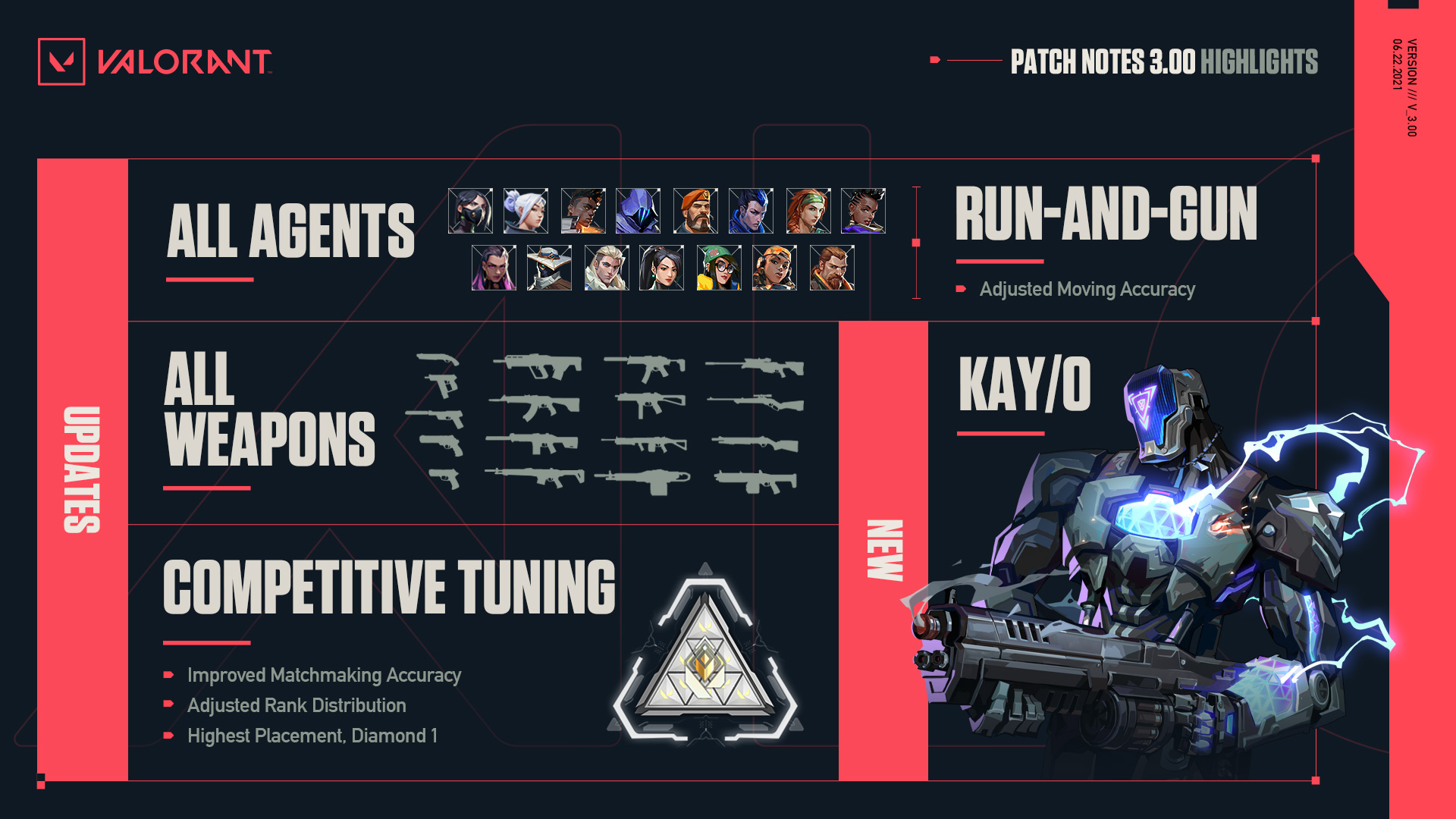 To hit our goal of creating a more dynamic sandbox, we have adjusted ability pricing, cooldown rates, and ultimate costs on every Agent. Generally, we noticed that certain agents were able to have too much impact with their abilities without making any significant tradeoffs. Our goal here is to create a healthier pace of abilities throughout a round and force you to think more critically about your purchase decisions.

Astra is incredibly popular at higher levels of play and we felt that a few of her play patterns are difficult to respond to round over round. We want Astra to be potent at applying map-wide pressure, but she’s able to do that much too frequently and without much counterplay or cost. These changes aim to add more counterplay on barrier drop, and provide much longer and clearer cooldown windows after Astra uses or recalls her Stars.

The introduction of KAY/O, warrants a tuning pass on our other Initiators.

For Breach, we’re removing his third flash charge and attempting to spread impact across his kit. The updates to his other abilities should provide more reliable outputs for Breach and his allies. Along with this, some abilities are getting shorter cast commitments and the speed of his Flashpoint projectile is being slowed to give Breach a chance to re-equip his weapon and work off his tools.

We’ve reverted the Jett/Cypher trapwire interaction. When we initially made this change, there was a strong sentiment about Jett feeling weak and Cypher feeling oppressive to play against.As players have gotten better at dealing with Cypher’s traps and Jett has carved out strong value in the game, we think that Jett should have to play and plan around Cypher's deliberate setup instead of being able to bust through it without thought.

Skye will lose her third flash charge, but she’ll now regain charges on a cooldown for her signature. We’ve made it so Skye no longer needs to put her gun down to activate Guiding Light and made some quality of life improvements when guiding the projectile or letting it fly free. We’ve felt Trailblazer’s vision radius has been slightly too small to clear the medium size rooms—where it should excel—and that the concuss could use a little more bite given how difficult it is to land. We hope these changes will help push Skye’s viability in solo queue and help her carve out a competitive spot in organized play.

Since launch, run-and-gun has been a hot topic. While we believe that there are certain situations that moving and shooting should be powerful, it is currently more potent than we’d like. This patch targets a piece of the puzzle that we haven’t touched before which is what we call “tag into accuracy.”

“Tag into accuracy” is our internal name for a phenomenon where a fully running player starts firing at you without slowing down; then, you shoot and hit them, applying the tagging debuff and slowing them down. This inadvertently drops their speed enough to make their bullets more accurate, even if they aren’t trying to come to a stop. This behavior is a root cause of a lot of the run and gun clips we see and the changes this patch should mitigate the effectiveness of this, particularly at longer ranges. All in all, our aim is to better reward proactive and precise movement.

With slightly reduced tagging, tighter deadzones and overall less accuracy in movement states, we aim to tighten up combat while trying to maintain as much intuition and muscle memory as possible.

Walk Shooting (not Run Shooting) has been reasonably accurate in VALORANT, allowing players to get off semi-accurate shots even at mid-range. With the changes to walk accuracy, shooting while walking will be significantly less effective at medium ranges, rewarding players who proactively stop before they shoot.

We’ve also reduced the running accuracy of Sidearms and SMGs in an attempt to tighten up engagements with those weapons while maintaining some of their identity in terms of mobility by being able to to move and shoot somewhat accurately at shorter ranges.

For Episode 3, our major focus for Ranked is matchmaking accuracy and fairness. We’ve evaluated our system and have made a few significant changes that should improve these key areas across a wide range of players. Without getting too much into the secret sauce of things, we want to share some of what you can expect in Episode 3.

Here’s some of what you can expect from our changes:

Our plan is to continue to monitor these changes after they’ve reached our live servers, and we’ll certainly make more adjustments where appropriate. We’re looking forward to getting these changes into your hands, and please continue to provide us with feedback on your experiences throughout Episode 3!

We’re excited to deliver major improvements with 3.0! This work is the culmination of significant effort and collaboration over the last several months involving many teams across VALORANT. Performance is a war won in the margins, and we’re generally able to provide small, incremental changes. This time, however, many of our smaller items came together all at once.

Players with medium to high spec machines (CPU bound systems) may see up to 6% performance improvements as a result of the following work:

Fixed a bug where friends' names were merging together in the social panel when interacting with them, jumbling them together at times. Word scramble no longer!